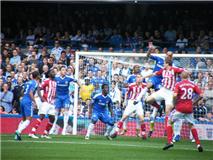 We are never going to win every game 6-0 but could have probably made life much easier for ourselves had we not missed a host of chances.

Tony Pulis must surely have been very relieved after seeing his side somehow escape the sort of 7-0 hammering they got when they were last at Stamford Bridge, because how we failed to notch up at least a 6-0 success again is something of a mystery.

We started with conviction and Stoke really must have feared the worst when Ryan Shawcross sent Florent  Malouda toppling in the box after just 10 minutes.

No doubting it was a penalty. Step up Frank, who in spite of his recent spot kick form most of us would have been putting our mortgage on to bury the ball. However, it was a lame and side footed effort by Lamp’s standard which is probably why Thomas Sorensen didn’t appear to have much trouble working out which way the Chelsea man was going to go. He saved it with some ease.

That was a real let-off for Stoke, but when Sorensen struggled to cope with a Didier Drogba special 30-yard free-kick soon afterwards you got the distinct feeling that Chelsea’s prolific start to the season wasn’t going to end here.

We needed to be patient, because the opposition were working hard packing the midfield, but in the 32nd minute the goal came when Jones surrendered the ball tamely and Stoke paid a high price for it.  As we swept to the other end, John Terry slipped a peach of a pass through to Florent Malouda and the ball was in the back of the net before Sorensen could say 1-0.

It should have been two shortly afterwards, but this time the bar saved Stoke when Coles over-header clattered it. Somehow that single goal was all Chelsea had to show for 45 minutes of almost total domination. How it stayed that way, goodness only knows.

Within four minutes of the restart we split Stoke open again but Drogba’s powerful header was straight at Sorensen and Stoke got it away.

Michael Essien, out for so long injured last season, orchestrated most of our forages  with assistance from Jon Obi Mikel who had an excellent game

But as long as it stayed at 1-0 Stoke were still in with a chance and they nearly made us pay.

Substitute Greg Whelan was given time and space to let fly from 30 yards and with Cech beaten it was left to the crossbar to save us and maintain our clean sheet. Kalou could have finished it 3-0 with normal time up having bustled through the challenge of the last defender but one-on-one with Sorensen, he couldn’t finish.

Any lingering hopes Stoke might have harboured ended on 76 minutes when Drogs hammered home our second from the spot after Sorensen had brought Anelka down in the box.

Chelsea fans were treated to the sight of new £18 million midfielder Ramires for a brief cameo 6 minute appearance before the final whistle.

Frank was substituted on the 71st minute; he had looked out of sorts for the whole game and as it transpired he will need a hernia operation within the next week and will miss both of the England qualifiers

Similarly John Terry has been ruled out of England’s next two games due to injuries to his right hamstring and glute muscles. On a personal note, I cannot say I am actually bothered, let them  get sorted and back to full fitness. The International break could not have come at a better time!!

His choice last week at Wigan from the Chelsea away support was “Can we play you every week?”

So come on you Chelsea Supporters:-  We need a song for Ramires!