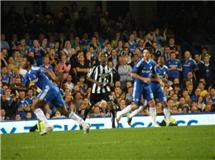 Carlo Ancelotti made significant changes to the side that beat Blackpool 4-0 on Sunday, with Ross Turnbull starting in goal and John Terry returning from injury to support a backline consisting of the Dutch pair Patrick Van Aanholt and Jeffrey Bruma along with Paulo Ferreira, whilst Daniel Sturridge and French winger Gael Kakuta were also handed a chance to show their talent.

It all seemed like a very familiar start as Van Aanholt slammed in on 6 minutes from a Kakuta pass. However, shortly afterwards Kakuta was brought down by a nasty challenge from Ryan that necessitated the assistance of the Chelsea physios.

We dominated possession with Ramires once again working hard in the middle.  When Newcastle did finally make it forward it as Nile Ranger and Taylor linked down the right, it was nearly at the expense of a second goal for Anelka, but his slightly mistimed run saw him collect a lofted Bruma ball in an offside position after bursting through the high Newcastle defensive line.

Krul was again called upon soon after to deny us as it looked like we were about to stretch our advantage, but the keeper did well to prevent Kakuta.

With that fright over the visitors came to life as Campbell and Coloccini exchanged passes before sending the ball down the left for Shane Ferguson who was able to venture down the flank before whipping a ball in at the near post. It was headed on by Peter Lovenkrands and into the path of Ranger, who reacted quickly to slide the ball home and equalise.

There then followed a period of sustained pressure on us, following which a Bruma foul on Shola Ameobi drew both a yellow card for the Dutchman and an opportunity for the visitors to strike from an inviting angle at the edge of the area. Up stepped set-piece expert Taylor, the former Wigan man, to swing the ball into the far corner, leaving Turnbull with no chance, and turning the game on its head.
The travelling fans were up on their feet just moments later as Ameobi continued to cause problems for us rolling a shot across goal that Van Aanholt did well to hook away off the line.

In the second half JT (who had always been expected to play only 45 minutes) was replaced by Gael Kakuta and then Alex with Saloman Kalou respectively, but it didn’t take long for the away side to extend their lead after Ameobi fired in from outside the area.

Substitute Kalou then had to be stretchered off moments later after sprinting to reach a loose ball, only to pull up and clutch his thigh. He was in obvious distress as he was carried off and was replaced by 17-year-old Joshua McEachran, leaving us with no further options to change personnel and over half hour of the game to go.

Josh settled into the rhythm of play really well with a turn of speed and passing. At one point he slipped a ball through to Benayoun down the right channel, but he failed to meet the pass as he too pulled up with an injury. Yossi immediately called to the bench for treatment and was unable to continue, so now we were chasing the game with 10-men.

With just over 20 minutes remaining Van Aanholt raced down the left and threaded a perfect pass into the path of Anelka, who coolly slotted the ball into the back of the net. This brought the tempo of the game right back up to the boil as whilst we were playing with 10 we looked the more composed and in control as the clock ticked down. Patrick Van Aanholt was excelling in a flying left-sided role and Alex offering thrust from the back, but I really felt it was the confidence of Josh McEachran, that stood out.

Newcastle continued to carve chances on the counter, and probably should have finished the tie when Lovenkrands raced clear down the left flank – defying calls for the offside flag to be waved – and lofted a ball at the far post that neither Ameobi nor Ranger could turn in.

Mike Williamson, Newcastle substitute, then had to make a vital diving header to prevent Ramires from nodding in a Zhirkov cross, but the defender was deemed to have pulled down Alex in the box.

Anelka, who had excelled in the second half, took the penalty and calmly levelled the score with just five minutes of normal time remaining. Once again the Bridge was buzzing and we very nearly capped off a remarkable comeback with a Ferreira volley that crept wide after a sweeping team move, again involving Anelka.
But it was the visitors who were to score last as a Jonas Gutierrez corner was met by the head of Ameobi who notched his second of the evening to send Newcastle through.

Graeme’s chant of the evening although short-lived after the Anelka penalty from the Matthew Harding:-