The new statue for Peter Osgood was unveiled this evening outside the West Stand entrance by Peter’s wife Lynne with family, friends and invited guests at a very wet and rainy Stamford Bridge .

Also there were a selection of the Chelsea Pensioners, representatives from Chelsea and, the supporters Fans Forum.

The Statue has been a close to four years in the making but now it’s here we can all remember ‘Ossie’ as we walk past his memorial on match days.

Supporters can view the new sculpture of the ‘King of Stamford Bridge’ as from tomorrow (Sat 2nd Oct) and of course, on Sunday for the Arsenal game where I would suggest an early arrival as it is sure to draw quite a large crowd. 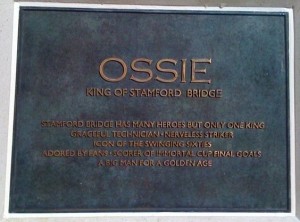 One thought on “Chelsea Unveil “King Of Stamford Bridge” Statue”