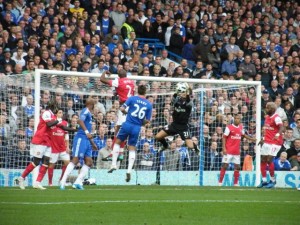 Arsenal paid the price yet again for their failure to take the chances they created and for their continuing inability to contain Didier Drogba as we stretched out a four-point lead over our title rivals.

The high tempo of the game began from the start when Arsene Wenger’s side came close to scoring in the first couple of minutes.

Chamakh’s header from Bacary Sagna’s cross was only inches away with Petr Cech beaten, before Koscielny somehow headed the resulting corner over the top, despite standing almost on the goal line.

Arsenal continued to dominate in the opening exchanges with Arshavin forcing a fine save from Cech and Samir Nasri narrowly off target with a low drive.

However, the threat of Drogba hung over Arsenal like a cloud and he issued the first warning signs by forcing a desperate block from Fabianski with an angled drive.

Then almost inevitably, for all Arsenals’ superiority, it was Drogba who made the first-half’s decisive contribution as we went ahead after 39 minutes. He applied a clever finish to Ashley Cole’s cross to give us the lead.

Ramires did well to win possession before feeding Cole, whose near-post cross was met with a subtle back heel flick from Drogba that flew in via the near post. He celebrated wildly in front of the Shed End not surprisingly as that was his 13th goal against Arsene Wenger’s side in 11 starts.

So 1-0 advantage to Chelsea as we went into the half time break.

Arsenal came back out refusing to be discouraged by the setback and pressed forward with urgency, but another moment of defensive frailty on their part almost saw us double our advantage on the hour.

Nicolas Anelka robbed the hesitant Sebastien Squillaci, and even though he rounded Fabianski the angle was too acute and the finish rolled agonisingly wide. That would have finished it off there and then, but the game still hung in the balance.

Arsenal were being punished for their wastefulness in front of goal, and Chamakh was the culprit again with 10 minutes left as he headed substitute Tomas Rosicky’s cross wide.

Ashley Cole also suffered disappointment when a stinging volley found the back of the net only to be ruled out by the linesman in a dubious offside decision.  His frustration was clear to see.

But for all Arsenals’ pretty passing and intricate patterns in the second half, it was us who applied the killer blow.

Five minutes from time Koscielny was booked for a foul on Anelka.

Step up Alex.  He concluded a fast bowler’s run-up with a true touch of Brazilian and the moment it left his boot there was only one outcome as it fizzed past the Arsenal goalkeeper and into the back of the net.

Arsenal were instantly deflated, and Fabianski  had to make two more fine saves from Michael Essien and Ashley Cole as it was us who looked the more likely to extend the victory margin.

So we enter the international break top of the table and next premiership game away to Aston Villa.

As for Alex’s strike, it must already be contender for goal of the season!!!