Skip to content
All Matches
November 21, 2010 Admin Away, League 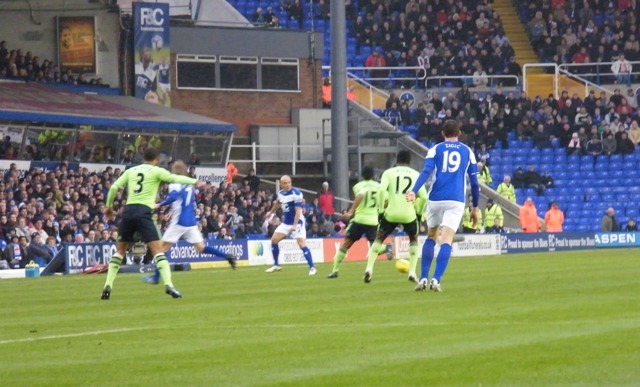 An opening-half goal for Lee Bowyer earned Alex McLeish’s side a 1-0 victory over us at St Andrew’s.

Their hero of the day and man of the match was Foster who bounced back from his errors on England duty in midweek with a series of stunning saves.

This was not Sunderland. It was a vastly improved performance compared to that 3-0 home mauling last weekend. We dominated proceedings for the entire 90 minutes but could not find a way to put the ball in the back of the net. We tasted defeat in back to back league games for the first time since the end of the 2005-2006 campaign and now only lead Manchester United on goal difference.

We were quickly into our stride with Salomon Kalou missing an early chance to put us ahead.Didier Drogba’s flick found Kalou with only Foster to beat but his shot went through the legs of the keeper and just past the post.

Foster made a fine save to keep Birmingham on level terms after Drogba was sent clear by Kalou. It was the kind of chance Drogba would normally convert but Foster raced off his line to reduce the angle and saved low to his left. We had quickly established a grip of the game and were taking advantage of having an extra midfield player.

But Birmingham stunned us by taking the lead via their first worthwhile attack after 17 minutes.

Sebastian Larsson’s right-wing cross was headed down by Cameron Jerome to Bowyer who was completely unmarked and lashed the ball past Petr Cech for his first goal of the season.

We tried to retaliate as Foster went down to his right to hold onto Drogba’s effort from the right of the box.

He then made a superb reflex save to keep out Drogba’s close range header from Nicolas Anelka’s centre.

We continued to dominate and Foster again did well to beat out an Ashley Cole shot after he had sized onto a pass from Kalou.

We were carving chances almost at will. Alex had a free header from Florent Malouda’s corner but directed it past the post. Drogba tried his luck with a low 30 yard free-kick and Foster was again alert to turn it around the post.

But he was helpless after 38 minutes when Drogba crashed a header against the crossbar from Malouda’s cross.

Ramires was first to react to the rebound but from eight yards out slashed his shot wide.

We continued in the same manner after the break although there were less clear-cut openings.

Johnson produced a superb tackle to stop Ramires after his run into the box needed treatment to his knee before being able to continue.

Kalou had Chelsea’s best chance to date of the second period when turning back inside but he curled his shot over the bar with Foster off his line.

Carlo Ancelotti brought on Jose Boswinga in place of Paulo Ferreira after 65 minutes.

The chances started to come again for us with Foster holding onto a Drogba free-kick and Kalou heading wide from Anelka’s cross.

Scott Dann’s back pass played in Kalou but Foster took the ball away from his feet with a perfectly timed challenge. Then Foster parried aside an Branislav Ivanovic header as the pressure again became relentless.

Liam Ridgewell was yellow carded for bringing down Boswinga but Birmingham held firm and we could not find a way through.

A frustrating end for the travelling Chelsea away fans at the final whistle in a week which has also seen the departure of Ray Wilkins.

Carlo Ancelotti has just Sunday and Monday to pick up the team up again for the Champions League tie against MSK Zilina on Tuesday.