For a game which took place on Remembrance Sunday, this is one which we will truly wish to forget as Sunderland gained an emphatic win stunning us with goals from Nedum Onuoha, Asamoah Gyan and Danny Welbeck.

It was our first home defeat since March and the first at the hands of Sunderland since 2001.

We went into this game hoping to stretch our lead at the top of the table to five points but never looked likely of winning.

The Wearsiders made a solid start and warned us inside the opening few minutes. Midfielder Lee Cattermole cleverly intercepted an intended pass from Branislav Ivanovic and played the ball out to Gyan on the left. The Sunderland striker, who scored the equaliser in their 1-1 against Tottenham in midweek, sent his shot just wide of the far post.

Although we had beaten Sunderland 7-2 last season, we were struggling to make headway against Steve Bruce’s side. The defensive partnership of Paulo Ferriera and Ivanovic, forced upon us by injuries to John Terry and Alex, struggled to cope with the movement of Gyan and Welbeck.

In the 18th minute we managed to fashion our first real chance when John Mikel Obi put Nicolas Anelka in the clear but he could not control it in time and the opportunity went begging.

Moments later Florent Malouda created an opening for Yuri Zhirkov but he ended his twisting run into the area with a shot that flashed past the far post. Chelsea midfielder Ramires sent an 18-yard header towards the top corner in the 24th minute but Craig Gordon was able to make the save.

Sunderland defender Michael Turner was booked by referee Chris Foy after he brought down Didier Drogba on the edge of the penalty area in the 28th minute. The Ivory Coast striker sent a rising free-kick just over the top of the crossbar. His next effort, from 35 yards after Lee Cattermole had brought him down, went straight into the hands of Gordon. 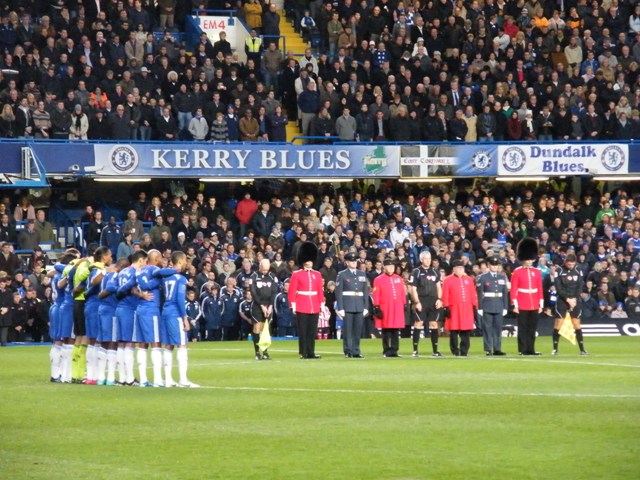 Petr Cech kept the game at 0-0 in the 36th minute when Onuoha crossed for Welbeck to head the ball towards the bottom corner. The Czech keeper dived low to his left to turn the ball around the post. Sunderland were unlucky not to score from the resulting corner when Kieran Richardson sent a shot across the face of the goal. Cech was the saviour again in the 38th minute when Gyan put Welbeck through but Cech saved with his feet. Moments later Welbeck was brought down by Ivanovic when he got ahead of the defence and Brana was lucky to get just a yellow card. But after Cech made another superb double save, Onuoha dribbled through the Chelsea defence to put Sunderland in front. It was the first goal we had conceded at Stamford Bridge since we hosted Aston Villa in March.

The afternoon got worse in the 52nd minute when Sunderland carved open our defence once more and Gyan added the second. Jordan Henderson collected the ball from Welbeck and put Gyan clear, and the Sunderland striker made no mistake as he slipped the ball beyond Cech.

We were now rocking and unable to cope with Sunderland’s quick passing and movement. In the 59th minute Welbeck sent a curling effort just wide of the far post as they threatened to add to their lead.

We had been restricted to a couple of long shots from Drogba and the boos rang out when Malouda was replaced by Salomon Kalou.

In honesty we had rarely threatened in the second-half and Bolo Zenden almost made it three for Sunderland when he tried to divert the ball past Cech from close range in the 63rd minute.

We huffed and puffed in a bid to get ourselves back into the game but Anelka was just over with an 18-yard shot in the 86th minute.

For those Chelsea supporters who hadn’t already left Stamford Bridge, misery heaped on misery as Sunderland made it three in the 87th minute when Ashley Cole’s poor back pass was intercepted by Welbeck and the striker kept his cool to beat Cech.

In his press conference post match Carlo Ancelotti said ‘We didn’t play a good game, Sunderland played a fantastic game with fighting spirit, more mentality and we didn’t show this kind of mentality.’

Let’s hope the ‘right mentality’ has returned to the squad by next Saturday when we face Birmingham away.