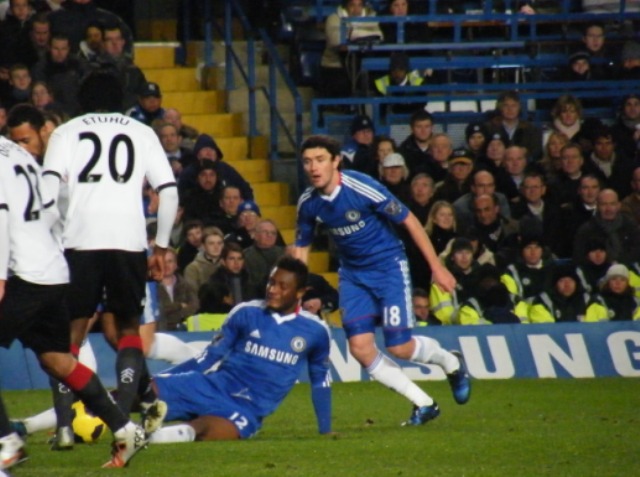 Essien headed home on the half-hour mark to put us in front but was sent off in the final moment of injury-time for a two-footed lunge on Clint Dempsey.

It happened too late for Fulham but anything less than a win would have been harsh on us, even though we missed numerous chances to kill the game off.

We took the initiative from the off, earning a succession of corners but couldn’t take advantage of the early superiority.

Dempsey tried his luck from the edge of the penalty area at the other end in the 17th minute but the ball was partially blocked by John Terry, which allowed Cech to make an easy save.

We responded immediately but Kalou sent a cross straight into the arms of Mark Schwarzer.

Drogba tested Schwarzer in the 28th minute with an angled 30-yard free-kick before we broke the deadlock on the half-hour when Kalou’s cross was headed down and into the net by Essien.

The goal was scored while Drogba lay injured inside the penalty area and he required treatment before the game could restart.

We continued to threaten but the final ball was often poor, much to the consternation of Coach Carlo Ancelotti on the touchline.

Five minutes before half-time Florent Malouda brought a fine save and then seconds later Kalou was just a foot wide of the target when he burst into the area.

Briggs kept Fulham in the game when he cleared the ball off the toes of Kalou at the far post seconds before the interval but we should have added a second in the 55th minute when Kalou waltzed through the Fulham defence only to see his shot half-saved by Schwarzer. That did enough to take the pace off the ball and, as it rolled towards the net, Aaron Hughes ran back to clear off the line.

Fulham replaced Dickson Etuhu in the 62nd minute with striker Andrew Johnson as they looked for a way back in. Etuhu’s last action had been to put his knee into the back of Essien, who required lengthy treatment before continuing.

Essien recovered sufficiently to fire a 25-yard shot high into the crowd in the 66th minute.

Seconds later, Malouda nicked the ball off the toes of Schwarzer but Drogba’s shot was cleared by Briggs with the goal at his mercy.

We continued to pile forward and Essien put Drogba clear but the Ivory Coast striker hesitated enough for Fulham to clear the danger.

We then had three successive chances to score. First Malouda’s shot was saved by Schwarzer and then Mikel’s shot on the rebound was again punched clear by the Fulham goalkeeper. Finally, Branislav Ivanovic crossed for Hughes to clear as Drogba looked to score from six yards.

Fulham substitute Zoltan Gera was unlucky not to level the scores in the 82nd minute when his 20-yard volley had to be punched clear by Cech.

Sturridge was introduced for Kalou with five minutes to play, followed by Ferreira for Bosingwa who had just recovered from an elbow in the forehead from Dempsey.

All along Chelsea fans were monitoring the progress in the Manchester Derby which eventually finished goalless. So good news for us even if the evening was marred by a red card for Essien in the final minute of injury time.