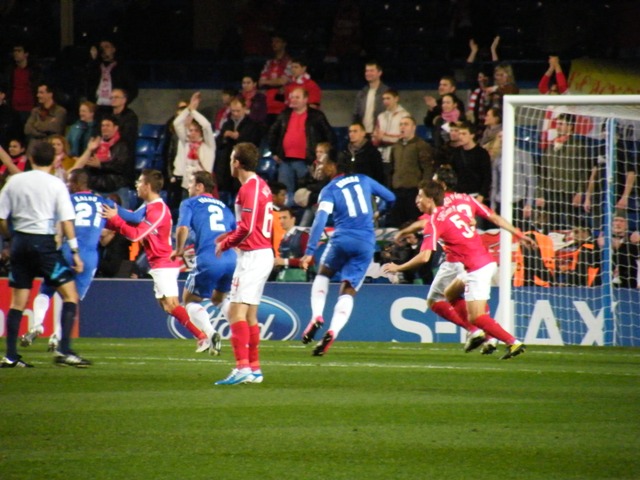 We eased into the knockout stages of the Champions League with a comfortable victory over Spartak Moscow making it four wins out of four in Group F.

Carlo Ancelotti rested  John Terry and Michael Essien for the clash with Didier Drogba taking over the captain’s armband on his first Champions League outing of the season.

It was a rather muted first half. Spartak having the first real chance inside 10 minutes with Aiden McGeady curling a shot just wide of Petr Cech’s right-hand post.

We were a bit slow initially and it took almost a quarter of an hour before Nicolas Anelka cutting inside from the left curled an effort narrowly wide.

Minutes later and a goalmouth scramble following a Yury Zhirkov free-kick almost put us ahead. Alex’s scuffed effort fell to Ivanovic who tried to backheel home from a couple of yards but was denied first by the offside flag and then goalkeeper Dykan.

Despite not being quite in full flow the chances continued to come, primarily to Drogba who headed wide from a Zhirkov corner on the half hour mark before forcing Dykan into a decent save after a powerful run down the inside right channel.

However, it was far from one-way traffic with Spartak Moscow going close with their own “Alex” who forced Cech to parry after a strong shot before Kombarov lashed another effort wildly over the bar.

The best opportunity of the half came minutes before the break from another Chelsea corner. The ball found Ivanovic at the near post and his flick found Alex arriving late at the far post but, under pressure the Brazilian could only sky the ball over the cross bar from close range.

Carlo Ancelotti clearly had words with his players at the break as we emerged for the second half in more determined mood and within four minutes of the restart had taken the lead with a gorgeous goal by Anelka. He began the move, swapping passes with Salomon Kalou before regaining possession on the right hand side of the box and clipping the ball past Dykan and into the far corner with the deftest of touches from a tight angle.

With the lead established we began to dominate and it didn’t take long for us to add a second. Drogba out on the left, twisted and turned past Pareja and into the box where Suchy brought him down leaving the referee no option but to point straight to the spot.

Drogs dusted himself down before smashing a superb penalty past Dykan, who had guessed the right way, but was unable to get near the ball and so we doubled our lead.

We were not finished there, however, as five minutes later the result was put completely out of doubt. A precise free-kick by Drogba out on the right found Ivanovic at the far post who stooped to power a header low into the corner.

Now Ancelotti could use the comfortable big lead to make changes. McEachran replaced the excellent Mikel and Kakuta later followed for Anelka with Sturridge on for Drogba.

With five minutes to go the visitors managed to pull one back through Bazhenov. Welliton was the creator sliding a low cross from the left for the substitute to tap home yet it was to prove a mere consolation for the Russians.

Indeed Chelsea could have extended their lead further with Kalou missing another chance before Ivanovic bagged his second of the night with an emphatic finish from inside the box.

The win sees us confirm our place in the knockout stages although elsewhere in the group Marseille’s thrashing of MSK Zilina means we must wait to confirm top spot, with the Slovakians the next Champions League visitors to Stamford Bridge.