Skip to content
All Matches
November 8, 2010 Admin Away, League, Liverpool 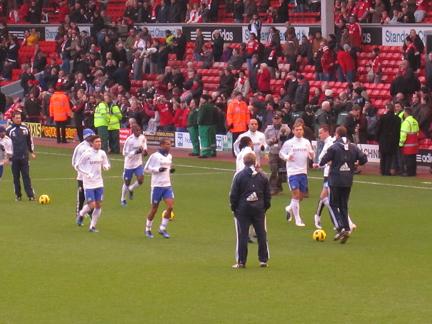 Fernando Torres proved to be our undoing and clearly has a liking for playing us at Anfield, as his six goals in five matches at home shows.

It was always likely the result would come down to who took their chances and with Didier Drogba left on the bench until the second half; Torres was given a head start.

He did not need a second invitation and in addition to his two well taken first-half goals he was a constant threat to our defence.

It took just 11 minutes for him to reopen old wounds with a classic piece of finishing courtesy of a cross from Dirk Kuyt, making a return after a month’s absence with an ankle injury, on the left.

The Dutchman chipped a pass over the head of John Terry and Torres took one touch before firing past Petr Cech.

Possession was fairly even but Liverpool created the best chances, having a penalty shout dismissed when John Terry’s clearance bounced up on to Yuri Zhirkov’s arm from which Raul Meireles shot at Cech.

Torres did not give Cech any such chance with his second just before half-time.

Meireles dispossessed Ashley Cole in the centre of the pitch and rolled the ball out to the Spaniard on the left of the penalty area. Cutting inside he curled a shot around Branislav Ivanovic and inside the far post.

It was Liverpool’s best first half of the season, which was as much down to their organisation at the back as Torres’ potency up front.

With Jamie Carragher, restored to centre-back, the hosts limited us to one shot on target – and that was a Salomon Kalou header straight at Jose Reina.

Drogba’s arrival for the start of the second half was very welcome but his first shooting opportunity saw him curl a 30-yard free-kick well wide.

Ramires headed over and Zhirkov’s shot was turned around the post by Reina, who also produced a brilliant close-range stop to deny Florent Malouda.

Having got themselves into a winning position it was now a question of holding on to it for Liverpool as we cranked up the pressure.

Kuyt almost wrapped things up 15 minutes from time only for Cech’s outstretched leg to divert the ball wide.

I think we somehow knew it wasn’t going to be our day when Nicolas Anelka’s shot squeezed under Reina, whose slight touch deflected the ball up on to the bar and then Carragher cleared from the lurking Drogba two yards out.

The win moved Liverpool into ninth, the first time they have been in the top half since the opening weekend of the season, after three successive Barclays Premier League victories.

They are certainly not in a position to challenge us at the top of the table – where we still have a two-point lead over Manchester United – but they proved, on their day and with Torres on form that they remain a match for any side.

Thank goodness we only have to wait until Wednesday at Stamford Bridge against Fulham to hopefully put matters right.

Chelsea At Home To Liverpool In Quarters