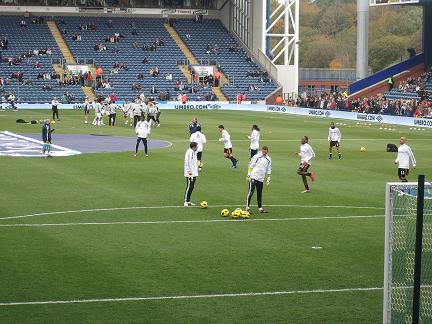 Over 4,000 of the ticket allocation for the Blackburn game had been sold by the Thursday preceding the game and with another 500 or so sold on the gate, we were very close to completely selling out.

A great turn out by the Chelsea supporters and certainly the best there has been there for a long time up there. Blackburn is very near to becoming one of the best away days for a lot of the Chelsea faithful. With the Birmingham away game approaching in November there is another chance to show what great support we can muster at away grounds.

Whilst on the subject of away games it has recently been announced that the Bolton game at the end of January has been moved, for tv purposes, to a Monday night with, as usual, not a thought given to the travelling supporters. With Chelsea FC gaining a financial bonus from the screening of this game surely they could pass on some of the money to the travelling supporters and provide us with a free train and coaches and still have some extra money in the bank?

The Wolves away game in early January had already been arranged for midweek and with Sunderland at the Stadium of Light also a night game on February 1st, this means time off work and long journeys for travelling Chelsea fans.

The CSG has long campaigned that midweek games should be played between teams who are within a 100 mile radius of each other, thus enabling fans to get home at a decent time and not have to use so many holidays from work.

Whoever programmes the fixture computer has a lot to answer for!

The next Fans Forum meeting is to be held on November 14th prior to the Sunderland game and is deemed by many to be the most important one of the season as it discusses next years ticketing policy.

The CSG will be lobbying hard for no more ticket price increases and the introduction of 16-21 season tickets. We will also be pushing the club to cover the cost of the VAT increase of 2.5% in January.

With recently signed lucrative deals with various sponsors for future seasons and a huge new overseas tv rights deal in place for this season, the least the club could do is help out supporters with the VAT increase.

Another new source of income for the club will come from the opening of the Chelsea store in Kingston. With the club trumpeting the news that the Kingston area is one of the most densely populated places for Chelsea fans, it would be logical to think that they would adequately deal with the supporters that would turn up for the opening event with three of the first team in attendance.

Unfortunately this was not the case and with hundreds of people queuing, some of them for hours, to catch a glimpse of their idols, the Chelsea staff them handed out raffle tickets to be randomly drawn out for people to get in the store. Surely the players in attendance could be told to stay until every last fan had been seen?

After all, the club pays them a lot of money and to dedicate an hour or two to the fans should not be too much to ask? From tv pictures shown of pre season tours to the USA and players spending a lot of time with our American fans in Adidas stores it is hoped that the club do not just do this when they are trying to crack lucrative new markets?

It has come to the attention of the CSG that some of our disabled supporters have been denied access to lifts to enable them to get to their seats within Stamford Bridge.

They were confronted by match day stewards in a very heavy handed and informed that they needed passes to use the lifts. Along with our colleagues from the Football Supporters Federation we will be seeking answers from the club about this obviously poor situation.

We trust that this matter can be brought to a satisfactory solution for our supporters.

Please let us know if you have any problems with the stewarding or policing at Stamford Bridge or any away ground.

Likewise if you have any good stories of help given to you by stewards or police and we will be happy to pass these on as well.

(With thanks for reproduction of article to cfcuk)