Skip to content
All Matches
January 26, 2011 Admin Away, League 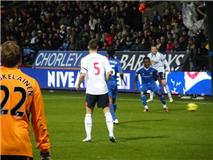 We saw off Bolton Wanderers with a 4-0 win at the Reebok Stadium to move within seven points of top spot in the Premier League.

Didier Drogba, Florent Malouda and Nicolas Anelka were amongst the goals as we made light work of the Trotters.

The night was a poignant one. It was Bolton’s first game at the Reebok since the death of Nat Lofthouse and the “Lion of Vienna”, such an icon for the Trotters that his name is synonymous with the Lancashire side, was remembered in a fitting way. The expectation on the current eleven to produce on such a night was huge.

With such stirring emotions in the blood Bolton almost made the perfect start after only three minutes when Kevin Davies – who is out of the same mould as the great man – found himself in the Chelsea box but his header was directed too close to Petr Cech, who dealt with the threat.

Bolton continued in the same vein in the early exchanges but that momentum was stopped dead in its tracks when a routine pass inside from Malouda to Didier Drogba resulted in an awesome strike as he unleashed an exocet which deviated wildly mid-flight past Jussi Jaaskelainen in the Bolton goal.

With the wind knocked from their sails, Bolton had to regroup and reorganize to threaten us. Another opportunity came and went after half an hour when good play on the left flank from Martin Petrov resulted in an accurately placed cross which was met by Matthew Taylor who bisected the Chelsea centre-halves. But his driven header was turned away by Cech, who has never conceded a goal at the Reebok.

As the half wore on it seemed more likely that the next goal would be ours and that was the case five minutes before the break. A persistent Florent Malouda had two chances to shoot. His first was deflected off the legs of Gary Cahill which gave the Frenchmen a second bite of the proverbial cherry and this time he tickled the ball between Jaaskelainen and the near post to double the Londoners lead.

As the players returned to the dressing rooms at half time, a faint wave of boos was heard as the home support showed their collective displeasure at events.

The second half continued in the same frustrating style for Bolton, they felt they got very little from referee Chris Foy in controlling Chelsea and Owen Coyle made his feelings known to the fourth official.

A third goal would have been disastrous for Bolton as there would have been no way back from such a deficit. Shortly before the hour that killer blow was dealt. Superb linking play between Malouda and Michael Essien in the left channel provided the catalyst as he crossed the ball which was met by the ever busy Drogba. His effort was deflected by Jaaskelainen into the path of Anelka, who showed the Trotters’ fans what they’ve missed since his departure.

Chelsea kept up the pressure and added to their already comfortable lead when Ramires bagged his first goal in a Chelsea shirt for the club since his arrival from Benfica last summer. Essien was involved again as another run down the left caused trouble for Bolton and his cross was not dealt with and the Brazilian was in the right place to compound a miserable night for Owen Coyle.

On such a night when Bolton remembered one of their own, the home support would have hoped for a better performance, we had showed due respect before the game, but soon went about our business with clinical and ruthless application.