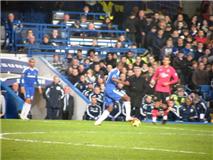 Looking to end our worst run in the league for almost 15 years we dominated this match pretty much from start to finish.

Both of our goals came from corner kicks courtesy of Branislav Ivanovic and Nicolas Anelka, the same duo who also found the net against Rovers back in October to keep us five points clear at the top of the table; but their efforts here were even more precious.

We needed no extra motivation to end our poor run in the league than knowing we could leapfrog fourth-placed Tottenham for at least 24 hours.

Buoyed from Sunday’s 7-0 FA Cup thrashing of Ipswich and having recalled all of our big guns, we flew out of the traps.

A heavy touch from Didier Drogba allowed Michel Salgado to intercept after the striker was played in by Anelka and Ramires smashed the ball against the bar after David Hoilett was caught napping. Not long after this Martin Olsson tested Petr Cech with a long shot from 25 yards at the other end. 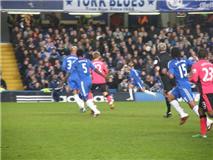 Drogba fired over from range before Blackburn’s David Dunn limped off to be replaced by Premier League debutant Jason Lowe. Jose Bosingwa blazed over from 25 yards and then a lightning break 12 minutes from half-time might have seen us break the deadlock but for a Gael Givet challenge on Drogba.

We were almost caught out moments later when Hoilett had space to shoot and force a fine save from Cech, with a little shaky defending preventing Nikola Kalinic and Lowe pouncing on the rebound.

Frank Lampard nodded over Bosingwa’s cross from point-blank range before Anelka was desperately unlucky not to score when he flicked Drogba’s wicked ball against Santa Cruz who had come on at half-time for his second Blackburn debut, with Kalinic withdrawn.

Less than two minutes into the second half and Anelka, dragged narrowly wide. Shortly afterwards Florent Malouda talked himself into a booking after a tackle on Mame Biram Diouf, who was too off balance to head Morten Gamst Pedersen’s corner on target minutes later.

We finally got the goal our overall dominance deserved in the 57th minute. Pedersen flicked John Terry’s header from Malouda’s corner straight to Ivanovic, who held off Ryan Nelson before squeezing a shot past both him and Salgado.

Malouda fired straight at Robinson as we looked for a quick fire second, which John Terry almost provided when he flicked Lampard’s mishit volley just wide midway through the half. A well-placed Frank Lampard then got the ball stuck beneath his feet, chipping straight into Robinson’s arms before Hoilett was replaced by Jason Roberts.

Robinson came to his side’s rescue again 15 minutes from time when a horrendous back pass from Christopher Samba sent Drogba clear.  Drogba should have scored but the keeper did well to close him down.

However, that good work was undone by poorer defending from the subsequent corner, Ivanovic leaping highest to head goal ward, with Anelka making sure from point-blank range.

2-0 up and from that point we could relax. 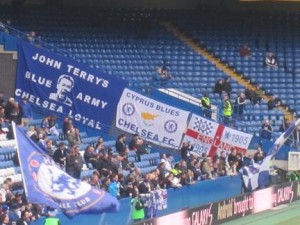 Anelka and Essien made way for Salomon Kalou and Josh McEachran for the final 10 minutes with Daniel Sturridge replacing Malouda for the final three as we comfortably played out time.

A special nod for Ramires who had a brilliant game – a great athlete and showing signs today of his real quality.

Ancelotti declared “I think our bad moment is over. Our play was good, with more intensity and quality, but our last two games have been at home. We have to check now how we are away – the next game at Bolton is very important.”

He was sufficiently buoyed, however, to suggest that there is still life in our ailing title challenge. “We have more confidence now and I am sure we will do better in the Premier League – it’s not easy to close the gap but we have to think that we can,” said the Italian. “We won last year and we want to do everything to be in the competition until the end.”