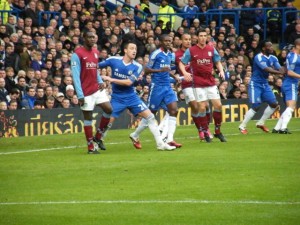 John Terry put Chelsea ahead 3-2 with minutes to go!

We dropped another 2 points in the Premier League title race with a 3-3 draw as our late fight back against Aston Villa was ultimately in vain.

Didier Drogba and John Terry looked to have snatched victory from the jaws of defeat with goals in the final six minutes at Stamford Bridge but ultimately poor defending cost us when Ciaran Clark nodded home in stoppage time.

Both sides had held the lead in a topsy-turvy game, with Frank Lampard’s penalty cancelled out by Ashley Young’s spot-kick and Emile Heskey’s header.

Jeffrey Bruma was handed his full Barclays Premier League debut as we made two changes for today’s visit of Villa. The teenage defender was preferred to Paulo Ferreira as replacement for the suspended Branislav Ivanovic, although Ferreira was recalled at right-back for Jose Bosingwa.

Villa rang the changes for the trip to Stamford Bridge, drafting in the fit-again Ashley Young and Emile Heskey, as well as awarding Richard Dunne and Ciaran Clark their first appearances in four weeks.

Having ended our worst run for 11 years with a 1-0 win over Bolton we were looking to pull ourselves back into the top four.

Villa had been thrashed 7-1 on their last visit to Stamford Bridge but, despite us having nearly all the ball, the visitors had the first shot when Gabriel Agbonlahor drilled narrowly wide of goal.

At the other end, Bruma’s header from a corner was blocked out.  Stewart Downing curled a 20-yard effort straight at Petr Cech before a Chelsea break saw Florent Malouda send a difficult header wide.

Malouda was then the victim of a stupid lunge from Villa captain Stiliyan Petrov, who was rightly booked.

Villa’s lack of discipline cost them again moments later, James Collins climbing all over Malouda to concede a penalty.  Brad Friedel and Collins protested with both subsequently booked, but it was a definite foul.

Frank Lampard stepped up to convert his first goal since August. 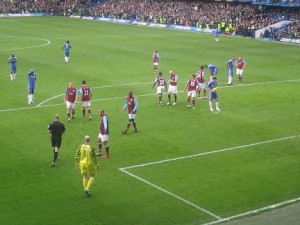 Frank Lampard scores the penalty to put Chelsea one up

Villa’s frustration boiled over and they were penalised for more than one late tackle before Nigel Reo-Coker became the fourth visiting player cautioned for tripping Didier Drogba.

A completely-unmarked Clark should have equalised on the half-hour mark when he nodded Young’s corner over the top. Dunne then produced a last-gasp tackle to stop Malouda and a vital clearance to thwart Michael Essien.

The defender then missed a great chance to level when he hooked over after we failed to deal with Downing’s clipped ball.

Ramires was booked for clipping Petrov’s heels and Villa’s pressure finally told when Essien’s tackle on Reo-Coker handed them a penalty four minutes before the break. Young made no mistake from the spot.

Agbonlahor and Clark became the fifth and sixth Villa players booked for bad tackles on Ramires and Essien, respectively before Collins nodded another half chance too close to Cech.

Villa picked up where they had left off at the restart and Cech just beat Heskey to the ball, with Ferreira ultimately forced to clear. But just two minutes later Heskey climbed above young Bruma to power home Downing’s right-wing cross.The former England player was then booked for a late tackle on Essien.

Lampard, Drogba and Ramires all saw shots blocked before the latter drilled just wide after the ball broke to him in the box.

Lampard was unlucky not to level in the 63rd minute when he sent a vicious volley straight at Friedel, who then closed down Malouda as the forward tried to slot Lampard’s ball through the keeper’s legs.

Ancelotti substituted Salomon Kalou for Ramires for the final 17 minutes. 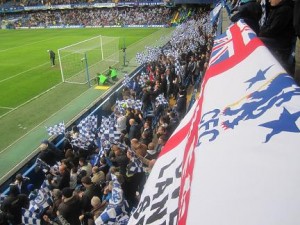 Free flags for the supporters didn't do much to help the atmosphere!

Downing drilled straight at Cech from 25 yards before John Terry was carded for a lunge on Young and Ancelotti played his final card by introducing Daniel Sturridge for Nicolas Anelka.

We were continually denied in the final 10 minutes by some desperate Villa defending. But then Drogba came to rescue six minutes from time with an equaliser. His miscontrol somehow set up Kalou, whose shot was blocked back for Drogba to rifle home.

Drogba then nodded over Malouda’s corner after Villa had brought on Marc Albrighton for an injured Agbonlahor.

With barely a minute remaining, we snatched what the entire Stamford Bridge thought must have been the winner.

Drogba’s bullet header was parried by Friedel straight to Terry, who produced a superb side foot finish to spark wild celebrations, with Ancelotti mobbed by his own players.

But the joy was short-lived as euphoria led to despair with Clark stealing in completely unmarked at the back post to nod in Albrighton’s cross in extra time.

We piled forward in the final seconds but couldn’t find an even later winner and the final whistle leaves us in fifth place and six points off top spot after another frustrating afternoon.