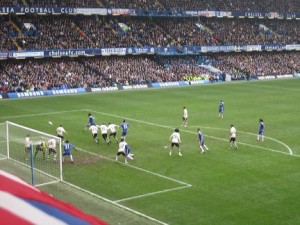 The FA Cup returned to Stamford Bridge today with a 12:30 kick off for our 4th round replay against Everton. Following the first games one all draw, this match was being played whilst others were involved in the 5th round. The winners of our tie awaiting a home leg against Reading FC.

On paper this looked like a fairly simple task to make it through, however after 90 minutes a scoreless draw saw the game go into extra time. Lampard eventually put us into the lead after 104 minutes only to see a late Baines free kick two minutes from time elude Petr Cech and earn the Toffeemen a draw and once again, we saw penalties decide the tie.

I’m sure I was not alone with thinking that this could be our downfall, how many penalty shoot outs have we actually been successful in! And so it proved to be when Ashley Cole and Nicholas Anelka missed their spot kicks and Everton went through by 4 penalties to 3.

And so another trophy will elude us this season, the Carling Cup went against Newcastle and the League looks all but gone. Next week’s first leg game against Copenhagen in the Champions League is now our one hope of still getting something from this season and a trip to our second home at Wembley.