…so sang Danny Kaye in the film “Hans Christian Anderson” in 1952.

He didn’t mention the cold…or the expense.

This was a trip I fancied.

I have stayed in Copenhagen twice before, in quick succession, in October and November 1998, for the Cup Winners’ Cup games against Helsingborgs, just over the water in Sweden ; and that game against FCK, when Brian Laudrup and Donal MacIntyre made their sole contributions to the history of Chelsea Football Club.

I thought I’d had it off when booking the British Airways flights as they were £ 55 each way when I started the booking process. By the time I’d finished, they ended up at £ 145…and from London City. It took me as long to get there from Ascot as it did to get from London to Copenhagen.

Anyway…a good little airport and a very efficient service on an 80-seater jet saw us land in Copenhagen at 10.30 on the morning of the game.

We were welcomed at passport control by two attractive Danish police-women, who laughed and joked and gave us a leaflet welcoming us to Copenhagen and highlighting a few dos and don’ts.  Superb policing, and what a contrast to the welcome we often receive, particularly in Mediterranean countries, with Robocops lashing their truncheons into their leather gloves and frothing at the mouth in anticipation of cracking a few heads.

Two of our party had booked late and ended up going via Frankfurt, but arrived at around the same time. Our rendezvous at The Radisson didn’t quite work though as there are three Radissons in Copenhagen.   They were staying at the one hosting Frank Arnesen and an international poker tournament…we were at the one looking after the esteemed members of the English sports press.

After a £ 7 (that’s “Seven pounds”) bottle of Carlsberg (250 cl, but the very fine “Elephant” version), we regrouped and found a very pleasant Italian restaurant for an expensive but enjoyable meal.

With the hotel bar offering pints of lager at an excruciating £ 9, we ventured out in the bitter cold and ended up at The Old English, a pub, where the beer was cheap…at £ 5 a pint.

There were a couple of bars which had billed themselves as Chelsea Pubs, the normal match-day haunts of Chelsea’s many Danish fans, and apparently the prices were much more reasonable.  The cold precluded us finding them however.

We got taxis to the Parken Stadium, where the stewarding and policing was again faultless.

This place has changed a bit since 1998.  The corners have been filled in with, what I am told, are offices, and bizarrely, a hospital.

Still, there was a decent atmosphere and the 2,000 Chelsea fans made themselves heard, even the two near me who removed their tops.

Again, the non-alcoholic lager placebo effect was raging as freezing Chelsea Yoof swigged back 0% Carlsberg…before resorting to showering people with it in mid-“Bouncy”.

The game was more comfortable than I had hoped for.

Chelsea started well with Fernando attacking and crossing for Malouda to volley into the crowd. Torres continued making a nuisance of himself and Jorgenesen got an early booking for fouling him.

Good old Gronks…always liked him…played a pass backwards which Anelka intercepted and shot home from just inside the box. A nice goal and his sixth goal in Europe this season.

Torres then had another good run only to see his cross go out for a goal-kick.

Anelka, Torres and Cole all had further chances but the score remained 1-0 at half-time.

After 54 minutes, Essien found Lampard who in turn played a lovely little pass for Anelka score his second, belting one in across the ‘keeper.

Both sides had a couple more chances, with The Gronk appealing for a penalty but being given offside instead…familiar. He was subbed five minutes from time to generous applause from both sets of fans.

Drogs got 20 minutes at the end, coming on for Anelka, whilst Malouda got ridiculously booked for leaving the field too slowly as he was replaced by Zhirkov.

Kalou replaced Torres in the 91st minute. I found that puzzling as there was nothing to gain and just Torres’s confidence to be lost.

Carlo however got terrific support from the freezing travelling fans and responded accordingly, punching the air in acknowledgement as he walked from the halfway line to the tunnel in our corner. 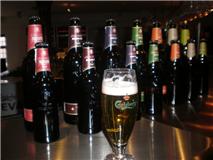 Overall a decent, comfortable performance, with Torres beginning to look the part, much to the distress of the hacks back at the hotel who had the “Bridge of Sighs” headline already written and their graphics boys preparing the badge broken in half.

A few more expensive post-match beers followed before a relatively early night in anticipation of the Wednesday morning tour of the Carlsberg Brewery.

This proved an excellent way to kill a couple of hours…very informative and enjoyable, even if the guide confessed, shockingly, to supporting Tottenham.   The two free beers at the end were most welcome.

Lunch at The Hard Rock café was followed by taxis to the airport and a return flight to London City…landing 15 minutes early at 5.20 in the evening…just in time to sit in the rush hour.

Good fun, but possibly the coldest and most expensive Chelsea trip so far…