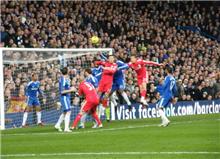 This match was eagerly anticipated with all the focus on one man in particular.

Fernando Torres was in the starting line-up after his £50 million English transfer record breaking move from Liverpool.

The Spaniard had perhaps burnt bridges with Liverpool fans after announcing he had moved to a bigger club but promised that he would not celebrate if he scored – but in the end they didn’t have to worry about it.

Liverpool produced a resolute defensive display to record only their second victory in seven years at Stamford Bridge courtesy of a Raul Merieles strike midway through the second half.

We made our intentions clear from the beginning with a very attacking line up that would make any defence quiver but in a strike force that promised so much it actually produced very little.

Didier Drogba, Torres and Nicholas Anelka failed to force Pepe Reina into any real save of note the whole game but it was largely thanks to the back three of Martin Skrtel, Carragher and Daniel Agger.

Luis Suarez who came on and scored on his debut for the Reds against Stoke City ¬had to remain content with starting on the bench as Dalglish kept faith with his winning formula which has seen Liverpool creep up the table into seventh with three consecutive wins and clean sheets to boost entering this game.

But if history was anything to go by, a Reds victory at Stamford Bridge seemed unlikely with only one win since 2004.

Maxi Rodriguez clearly had not heard the news that he had moved to Stamford Bridge as he slipped a pass into the former team mates path.

However the finish from the World Cup winner uncharacteristically lacked composure but it was an early scare for the visitors.

If this was an indicator that chances in this match were going to come thick and fast the next twenty minutes put pay to that notion.

Liverpool seemed happy to contain us and counter attack when possible and if Dirk Kuyt’s pass had been more accurate into Raul Meireles the away side might have created their first real opportunity.

Torres was struggling to find any joy through the middle and drifted out onto the wing where Daniel Agger unceremoniously blocked his run- much to the delight of the travelling away support- and gave away a free kick in a dangerous position.

But nothing could be made of the chance which epitomised the opening half hour.

The game was screaming out for a goal and it nearly came through Torres after Drogba threaded a lovely through ball to him- it was first time the Blues had managed to penetrate the Reds defence but Jamie Carragher was there to put the block in.

Liverpool should have been ahead moments later as the game suddenly sparked into the life.

Perhaps it was fortuitous that the ball kindly fell to Steven Gerrard in the box but he took advantage of it and drilled a low ball across goal; Rodriguez will still be wondering how he managed to hit the bar from a few yards out with the goal gaping.

The first half was brought to a close but not before Branislav Ivanovic and Petr Cech displayed the kind of tension which was surging through the game.

A lovely cross by Martin Kelly on the right caused confusion between the pair as they both went for the same ball resulting in the defender and goal keeper squaring up to each other in a heated debate.

After the break there was a flurry of half chances as we tried to find that elusive opener. Anelka had a couple of pot shots at goal and an Ivanovic header failed to test Reina.

The visitors looked reasonably comfortable as we continued to struggle to create any clear cut opportunities. Torres’s face cut a frustrated figure as he was marshalled out of the game by Carragher who was outstanding at the back for Liverpool.

On 65 minutes Torres was replaced by Salomon Kalou.

Anelka sitting slightly deeper found some space and his twenty yard shot was fired agonisingly wide but it told the story of the match for us having failed to register a shot on target in 67 minutes of play.

Inevitably we were made to pay as Liverpool took the lead on 69 minutes. Gerrard ran down the wing and put in a cross which again caused confusion in the Chelsea box and Meireles was on hand to fire home from close range grabbing his fourth goal in five games.

Torres off and a goal behind was not an image many had envisaged before the game.

Florent Malouda nearly found equaliser moments later but he was foiled by Reina who was forced into his first real save of the match.

Liverpool continued to look threatening on the counter attack and with 10 minutes to go they nearly doubled their lead.

Substitute Fabio Aurelio orchestrated some space in the Chelsea box, jinked onto his right foot and fired a powerful shot at Cech who was on hand to make the save

With just a few minutes to go our day was summed up by a Frank Lampard strike which he blazed high and wide leaving Stamford Bridge disappointed and subdued.

This result leaves us ten points adrift of league leaders Manchester United, whose slip-up at Wolves had given us some hope of getting back into the title race.  However those hopes would now seem to have faded completely.