Skip to content
All Matches
February 15, 2011 Admin Away, Fulham, League 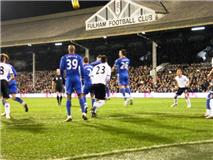 Petr Cech saved a late penalty by Clint Dempsey in the 93rd minute as the West London derby at Craven Cottage ended in a 0-0 draw.

It was the home side who were the first team to threaten five minutes into the game as ex-Chelsea wide man Damien Duff blasted a ball low into the box from the right toward the waiting Andy Johnson. John Terry managed to nip in front of the striker and put it out for a corner.

Frank Lampard took our first shot on 16 minutes from just outside of the penalty area, only to have his effort blocked. Ramires blasted the follow up but it took a deflection and went out for a corner, which we failed to capitalise on.

Danny Murphy almost handed a goal to us just over five minutes later with a looping backpass well outside of his area which Nicolas Anelka nearly got to ahead of Mark Schwarzer.

At the other end Damien Duff drove the ball at the Chelsea goal from just outside the 18-yard-box but ‘keeper Cech dealt with it expertly, clutching the ball tight to his chest.

Seconds before the half hour mark Frank Lampard mishit the ball just over the Fulham cross bar following a low cross from Branislav Ivanovic.

Florent Malouda’s turn was next as yet another shot from distance failed to find its mark. He made a run down the inside left of the pitch only to pull the trigger too early, putting the ball wide and over of the Fulham goal.

As we started to turn up the pressure Ivanovic nearly beat Schwarzer from well wide on the right wing. The fullback drilled a high ball into the area, which was most likely meant as a cross, but the keeper was on hand to tip it over.

Fulham weren’t without their first half chances. Ivanovic earned himself the first yellow card of the game for shirt pulling. Danny Murphy made the resulting freekick far too easy for Cech, who came out to claim the ball and did so more than comfortably.

Torres had his first chance of the game in the final minutes of the first 45, he got in behind the two Fulham centre halves after a long headed ball from Michael Essien. He managed to turn his man but then was only able to toe poke a weak ball towards Schwarzer.

New signing David Luiz had his first start for us and showed his worth playing a perfectly weighted ball through the middle from deep within his own half. In what was to be the last move of the first period Torres got on the end of it but his first touch let him down as the ball got away him.

The first chance of the second half fell again to the Spain forward as Ramires beat Carlos Salcido wide on the right and lofted a ball across the Fulham six yard box. Torres rose high and beat his defender Aaron Hughes only to nod over the bar.

We came back out on the pitch looking a more purposeful team, finding some of the conviction that had been lacking in the first half.

Salomon Kalou then came on in place of Anelka, and not Didier Drogba, who had been left on the bench for this game. Although shortly afterwards Drogba was introduced in place of Torres.

Ancelotti moved Brazilian youngster Luiz to right-back. It nearly paid off  as the new man at the back won a corner. Lampard delivered a dangerous ball just below head height straight across the Fulham six yard box. Essien stretched but just failed to connect.

As the clocked ticked down and the game entered its last 10 minutes it was end to end in what had previously been a rather boring affair.

Within the space of three minutes each team had two chances.

The best of them coming from Drogba, who muscled his way in to the box and poked a worrying ball across the goal mouth. The worry soon faded though as no Chelsea player was found on the end of it.

With eight minutes to go Fulham made a double substitution.  Moussa Dembele and Murphy were replaced by Eidur Gudjohnson (who got a standing ovation from the Chelsea away end) and Zoltan Gera.

Luiz shone again, this time popping up on the left wing, showing his skill taking on two Fulham players before being forced out wide and delivering a ball into the box by virtue of an overhead kick – which was headed over by Kalou.

It was Fulham who threatened to steal all three points on the 89th minute as sub Davies headed over the bar in what looked at first to be a certain goal.

David Luiz gave away a penalty in the 93rd minute as worried Chelsea fans looked on. Dempsey stepped up and could have put his side ahead from the spot but blasted the penalty straight at Cech in the Chelsea goal, much to the dismay of the home fans.

We now have 12 fixtures to secure a top-four finish and Champions League football next season.

(Please note: The site admin will monitor all comments  posted to this site and will edit them as required. The views held are those of the poster and not the CSG)