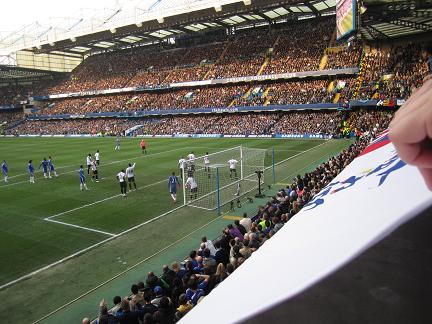 Manchester City came to Chelsea in a bid to keep their third place alive and to prevent being overtaken in the race for Champions League placing.

Despite the ‘bus parking’ by City, and, the loss of Carlos Tevez before the start probably didn’t help them, Chelsea dominated the game and were frustrated right up until the double substitution with Torres/Malouda off and the strike pair of Drogba/Anelka on, which saw the first goal arrive courtesy of a Didier Drogba free kick and new boy, David Luiz heading in.

The score remained one nil right up to injury time when our other Brazilian on the pitch, Ramires, took the ball on and ran at the City defence before shooting past Hart to end the game 2-0 and, a welcome 3 points and third place in the Premier League.

A two week break for Internationals now coming up before our next game away to Stoke City on 2nd April.

“Win on Lose – Up the Blues” : Pictures here