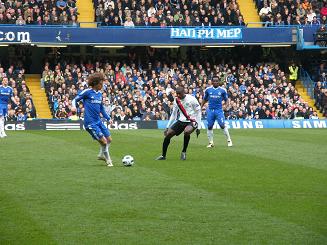 Another virtuoso display from David Luiz helped to keep our title hopes alive and kill off Manchester City’s in a 2-0 win at Stamford Bridge.

The defender broke the deadlock late on before Ramires wrapped up the points with a great goal in stoppage-time.

The win lifted us above City into third place and back within nine points of Manchester United with a game in hand, while City are now 10 adrift having played the same number of matches.

Carlos Tevez’s groin injury was a huge blow for the visitors and an even bigger boost for us ahead of kick-off. Mario Balotelli missed out for very different reasons, despite having apologised for the moment of madness that saw him sent off against Dynamo Kiev in the Europa League on Thursday night.

John Terry led Chelsea on to the pitch to chants of, “There’s only one England captain!” with Fabio Capello sat in the stands.

We started a bit slow and failure to close down Yaya Toure in the sixth minute meant the midfielder was given enough space to fire a low 20-yard drive saved well by Petr Cech.

We had a great chance to take a 12th-minute lead when Salomon Kalou fell over team-mate Ramires as both tried to finish from 12 yards.

We were then denied what appeared a clear penalty in the 20th minute when Joleon Lescott handled Kalou’s cross.

However, apart from the early Cech save, neither goalkeeper was being greatly tested.

On his 27th birthday, Fernando Torres was sharp, but had not received any great delivery. That changed in the 34th minute when Kalou presented him with a chance on his left foot from 10 yards, however, Nigel de Jong slid in to intercept. Vincent Kompany then put his body in the way of Frank Lampard’s close-range finish.

Kalou had a chance three minutes before the break when he brilliantly controlled Malouda’s low cross before turning and shooting straight at Joe Hart.

The second half did not start promisingly but when City gifted the ball to Torres in the 51st minute, the striker set up a wonderful, flowing move that Malouda should have finished with a goal instead of side footing straight at Hart.

There was concern soon after when John Terry stayed down after falling awkwardly. The England captain appeared in agony as Capello looked on stony-faced but, following brief treatment, Terry was able to continue.

City came back into the game before De Jong was cautioned for a blatant body check on Essien. Branislav Ivanovic was unlucky not to give Chelsea a 62nd-minute lead when his point-blank bullet header from Lampard’s cross hit Kompany. Edin Dzeko back-headed Milner’s free-kick wide before Ramires was booked for clattering into Aleksander Kolarov.

With 20 minutes, remaining, Torres and Malouda were withdrawn for Didier Drogba and Nicolas Anelka whilst Dzeko was booked for a foul on Luiz before Chelsea brought on Yury Zhirkov for Kalou.

A goal immediately followed as Luiz earned a 77th-minute free-kick wide on the left, Drogba whipped the ball in and the Brazilian glanced a header through the fingertips of Hart.

City sent on Adam Johnson for Milner before Barry saw yellow for a foul on Ramires.

Luiz went close to converting another free-kick from Drogba, who became the latest victim of a bookable offence when brought down by Kolarov.

City threw men forward but they were killed off in the second minute of stoppage time when Ramires danced through their defence clipping beyond Hart to secure the 3 points.

So David Luiz continues his eye-catching start to Premier League life whilst it is now time for International breaks before we play Stoke away on the 2nd April.