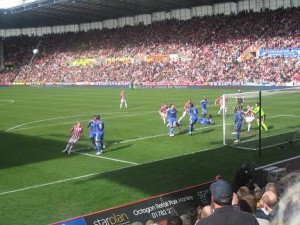 Premiership football returned today with Chelsea’s visit to The Britannia Stadium and a tricky away game with Stoke City.

Stoke were playing for points to ensure their survival whilst Chelsea needed the win to keep up their faint hopes of catching United at the top of the table, Man Utd were the lunchtime kickoff and, had come back from 2-0 down to win 4-2 so the pressure was on.

An error from new signing David Luiz let Walters away down their left and he managed to cut inside and put Stoke ahead after only 8 minutes!, not what the doctor ordered but it seemed to spur Chelsea into life and the first half saw us dominate which eventually led to a Drogba headed equaliser on 33 minutes.

Half time saw the teams go in level but after the performance shown, the second half would surely see Chelsea step it up another gear and get the win, however, Stoke had other ideas and after two superb saves from Peter Cech, it was plain that this was going to end in a draw, and so it proved.

Another two points dropped on United, the only saving grace was Arsenal and Spurts also dropping points but the Championship now looks a forlorn task!

Next up, Manchester United at home in the Champions League on Wednesday night at The Bridge, perhaps our last chance of silverware this season?

It’s Everton Away In The Carling Cup