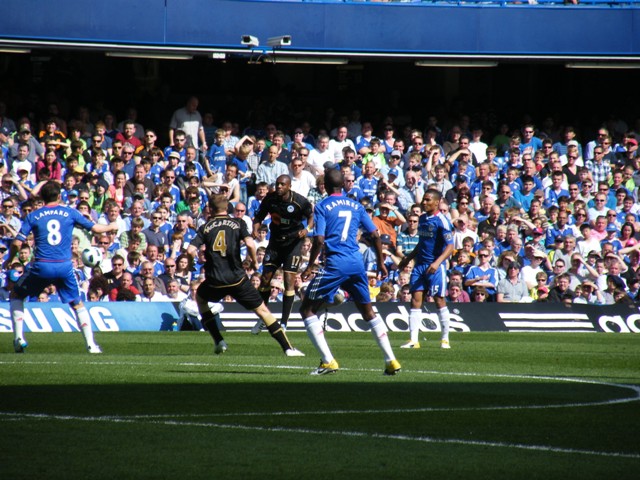 Malouda drove home through a crowd of players with 23 minutes remaining to ensure we move back into third place, two points clear of Manchester City.

It was a disjointed first 45 minutes although Didier Drogba created what should have been a first-minute opener when Frank Lampard and Ramires both miss-kicked his cross. Drogba also laid on two chances for the recalled Malouda, who was thwarted by Ali Al Habsi.

With captain John Terry rested, our defence also had a couple of wobbles, with Charles N’Zogbia flagged offside after being put clean through by Ben Watson and Hugo Rodallega causing consternation before Ashley Cole blocked his finish.

At half-time Carlo Ancelotti sent on the fit-again Yossi Benayoun for his first appearance since September in place of Mikel.

Nicolas Anelka was then withdrawn for Fernando Torres with just over half an hour remaining. But it was Drogba who almost made the breakthrough with a deflected free-kick tipped over by Al Habsi.

Wigan sent on Conor Sammon and Franco Di Santo for N’Zogbia and a nonplussed Rodallega, who stormed down the tunnel, before Torres sent a shot at Al Habsi after showing great skill to break into the box.

The deadlock was finally broken in the 67th minute when Torres prevented Al Habsi claiming Luiz’s flick-on from Drogba’s corner and Malouda drilled home through a crowd of players.

Ramires was briefly forced from the field after taking a nasty kick to the knee from former Chelsea man Di Santo.

Torres went agonisingly close to getting on the end of Drogba’s cross before just failing to control a long ball which went straight through to Al Habsi. Alex then made his first appearance since November, coming on for Ferreira for the final 15 minutes.

Another miscontrol from Torres denied him a shot at goal before Wigan began to go for broke, Di Santo forcing a scrambling save from Petr Cech.

They also sent on Victor Moses for Diame but the final few minutes were all about Torres’ and his work ethic to break open his scoring for us. He looked certain to do so after Benayoun put the ball though for him with a minute remaining but his strike was palmed behind by Al Habsi.

A stoppage-time Wigan surge saw Moses and Tom Cleverley thwarted and Maynor Figueroa booked for fouling Branislav Ivanovic, while Malouda had a second goal chalked off for an infringement just before the final whistle.