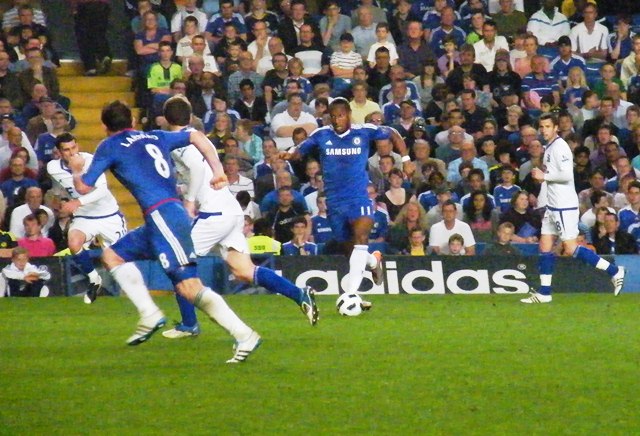 We moved to within six points of league leaders Manchester United last night with a comfortable 3-1 victory over Birmingham City.

We had the perfect start to the match with a goal in the third minute through Florent  Malouda to settle any nerves that may have been around.  The move started with a wonderful cross-pitch ball from John Terry to find Ferreira in acres of space on the right wing. Although he miscontrolled initially he was given time to deliver a cross which was flicked on by Drogba at the front post and volleyed past Ben Foster by Malouda from five yards out.

The early goal was a blow for Birmingham but they regained their composure well and went close to levelling the scores in the 20th minute. Ferguson played a long ball over the top of the Chelsea defence for Jerome to run onto.  The striker reached the ball before Terry and David Luiz and fired a left foot shot from the edge of the area towards goal but Cech got down well to turn the ball behind for a corner.

Despite stemming the flow of Chelsea attacks, Birmingham were still struggling to contain us and in the 25th minute Drogba came within inches of doubling the lead with an audacious attempt. Frank Lampard won the ball in midfield and the ball ran free to Drogba who hit it first time from 25 yards but the ball just dipped over the crossbar.

A minute later and we had our second goal through Salomon Kalou.

Drogba was involved again as he found Kalou 25 yards from goal, he turned Roger Johnson and took the ball away from the other Birmingham defenders then drifted across the penalty area before firing a powerful shot past Foster who was rooted to the spot.

We finished the half the stronger side, inspired by Drogba, and could have extended our lead in the first minute of injury time at the end of the half. Drogba latched onto a deflected cross from Kalou, his shot was blocked but the loose ball to fell to Michael Essien who fired wide from the edge of the penalty area.

After a dominant first half we began the second in similar fashion and created two earlier chances for David Luiz and Essien. Drogba was the supplier for both chances but neither man was able to test Foster with headers from inside the penalty area.

The visitors’ first chance of the second half came in the 56th minute from a right wing corner.  Sebastian Larsson delivered the cross into the penalty area and Roger Johnson rose above Terry but he could only head the ball wide of Cech’s right hand post.

The task ahead of Birmingham was made even harder six minutes later as Malouda added his second goal of the night. He rose unmarked on the six yard line to head home a cross from substitute Ryan Bertrand for his 12th goal of the season. It was a wonderful cross from the young full back and all the Chelsea players acknowledged this as they went to straight to Bertrand to celebrate.

Birmingham were given a lifeline in the 76th minute as David Luiz brought down substitute Matt Derbyshire. The striker spun away from Luiz with his first touch before the Brazilian stuck his foot in and brought him down on the left edge of the penalty area.

Before the spot kick was taken Larsson and Craig Gardner had an argument about who would take it, the Swede won and stepped up to fire the ball past Cech.

There was one final chance for the impressive Drogba in the 85th minute after a back pass from Larsson was picked up by Foster and we were awarded a free kick inside the penalty area. Drogba set himself up but then blasted his strike way over the crossbar with the whole Birmingham side between himself and the goal.

With the North London Derby ending in a 3-3 draw this now leapfrogs us into second place on goal difference with our next match on Saturday at home against struggling West Ham.