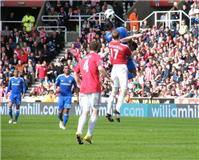 We dropped vital points in the title race yesterday as one goal apiece from Jonathan Walters and Didier Drogba resulted in a draw against Stoke City.

Walters pounced on a mistake from player of the month David Luiz to put Stoke ahead before Drogba powered a header past Asmir Begovic and despite our desperation to grab a winner in the second half we could not secure the three points.

In fact two class saves from Petr Cech in the 66th and 67th minute prevented us being defeated.

The result sees us drop 11 points behind leaders Manchester United with a game in hand.

Tony Pulis unsurprisingly stuck with the same selection that thrashed Newcastle United 4-0 last time at the Britannia Stadium. With an unbeaten home record to protect in 2011, captain Ryan Shawcross and ex-Chelsea centre-back Robert Huth were tasked with keeping the door bolted.

Carlo Ancelotti again changed his striking options and paired Nicolas Anelka and Drogba up front at the expense of Fernando Torres and Salomon Kalou. With Wednesday’s Champions League quarter-final match with Manchester United in mind, Branislav Ivanovic made way for Jose Bosingwa at right-back.

As the usual vociferous support bellowed from the stands, Stoke went straight on the offensive. In the second minute, Huth might have put them in front but could only head over a Jermaine Pennant corner after a quick free-kick threatened to catch us out.

Stoke continued to press us back and went ahead in the eighth minute after a solo goal from Jonathan Walters. The striker beat David Luiz to a Danny Higginbotham clearance on the half-way line and charged into the penalty area, cut-back inside Michael Essien and slotted past Cech to make the Britannia erupt.

With adrenalin pumped through their system Stoke were nearly instantly caught out when Ashley Cole produced a fine Begovic save from a header.

The two sides continued to probe each other but another mistake from us in the 17th minute saw Kenywne Jones race into the penalty area. John Terry recovered from his scuffed clearance on the right-wing to edge out the striker just yards from the Chelsea  net.

Begovic’s blushes were then saved in the 22nd minute after he flapped a volleyed Frank Lampard effort from 25 yards into Anelka’s path before it was hacked to safety by Huth.

The chances started to mount up for us as four minutes later Drogba blasted over a deep Anelka cross when unmarked on the edge of the penalty box.

We had built up a head of steam and there could be few complaints when Drogba expertly levelled the scores in the 33rd minute. He left marker Higginbotham for dead and headed a straight cross from partner Anelka into the top corner of Begovic’s goal. For the remainder of the half both Chelsea and Stoke continued to test each other.

We were first out onto the pitch as the second half commenced. Only three points would do to keep the dream of consecutive league titles alive.

However, it was Stoke who again started the brighter. In a recurring story of world class saves in the second period, Petr Cech blocked a low Pennant shot in the 49th minute after he was picked out by fellow winger Matthew Etherington.

We pinged straight up the other end of the pitch and Drogba dragged a shot just wide of Begovic’s far post under pressure from Higginbotham after he was played in by Essien.

Ancelotti was well aware of the pressure to get three points as on came Fernando Torres and Salomon Kalou in the 61st minute.

Despite the changes, Stoke were denied twice by Cech and the woodwork five minutes later. First, he somehow got a fingertip to Marc Wilson’s fierce out swinging shot after he was teed up from a free-kick by Glenn Whelan. From the resultant corner Huth seemed certain to score as he rose above his marker but Cech again produced a top draw stop to push the ball onto the crossbar and to safety.

Stoke continued to press for a goal to separate the sides. In the 72nd minute Walters couldn’t nudge Etherington’s header past Cech and then a trademark long-throw from Rory Delap was nudged wide by Jones.

After we had weathered a storm of Stoke attacks it was our turn to be denied by the woodwork in the 81st minute. Drogba was again the man in the thick of the action as he swivelled and fired a shot onto Begovic’s bar after a glanced header from substitute Ivanovic failed to be cleared.

There was a penalty shout for us five minutes later when Lampard was brought down by both Shawcross and Huth in the box after he was played in by Torres on the counter-attack.

Despite the fourth official’s board indicating six minutes of injury-time we couldn’t find a way through to keep the pressure on United as the game ended in stalemate.

It was an entertaining game which Carlo Ancelotti described post match as “tough but fair” and now attention turns to Wednesdays Champions League encounter against Manchester United.