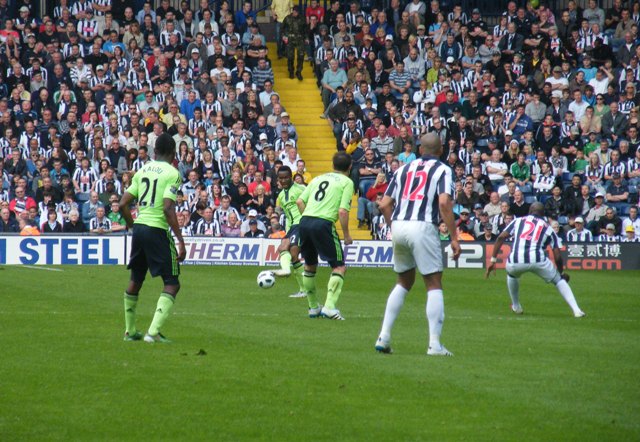 We showed great fighting spirit with a crushing 3-1 victory at West Bromwich Albion.

After Peter Odemwingie had given Albion a 17th-minute lead we replied with three first-half goals from Didier Drogba, Salomon Kalou and Frank Lampard.

If we are to finish the season with little more than a consolation of a Champions League place for next term, then we are going about it the right way

We have now lost just one of our last 11 matches in the Barclays Premier League, winning eight of those, to cut the gap to Manchester United at the top of the table to eight points. This was also our 14th consecutive top-flight victory against the Baggies, bringing to an end the unbeaten six-match run enjoyed by Roy Hodgson since he took over the managerial helm at the The Hawthorns in February

Up until the midway point of the first half, and in the wake of our Champions League exit at the hands of Manchester United in midweek, a shock appeared on the cards.

The Baggies started the game brightly and then via a series of short passes that involved Youssouf Mulumbu, James Morrison and Jerome Thomas, picked their way up the centre of the pitch from the halfway line.Thomas’ final ball to Odemwingie took a slight ricochet off John Terry, but the pass still found its intended target who sprinted into the area before deftly flicking the ball over the advancing Petr Cech.

It was Odemwingie’s 12th Premier League goal of the season.

However, Albion went into this game with an unenviable record of not having kept a clean sheet for 30 top-flight games, with that soon extended to 31 as we hit back in the 22nd minute.

A string of passes culminated in Ashley Cole’s ball down the left finding Kalou, who delivered a low cross into the six-yard box that goalkeeper Scott Carson failed to push away. In attempting to atone for Carson’s error, Nicky Shorey’s attempted clearance at the far post found Drogba who slid the ball home for his 13th goal of the season.

Four minutes later and we had turned the game on its head, making it appear so simple, albeit again Carson did not help his side’s cause.

On this occasion the Albion goalkeeper was low down to a 25-yard Drogba drive, but only succeeded in parrying the ball into the path of Kalou who proceeded to pass it into the net with an angled shot from 10 yards.

After being benched at Old Trafford in midweek, Drogba and Kalou were certainly making their points.

On the stroke of half-time any hope amongst the West Brom fans of a revival was curtailed as Chelsea scored a third.

Again the move appeared effortless, sparked by Drogba dispossessing Albion captain Chris Brunt 10 yards inside his own half before he sprayed a raking ball down the left for Kalou to chase. With time and space, Kalou had little trouble in latching onto the pass prior to picking out the advancing Lampard who drilled home a low right-footed shot from 15 yards.

More goals should have followed in the second half, initially seven minutes after the restart when Drogba spotted Carson off his line, only for a powerful dipping shot from 35 yards to land on the roof of the net.

Lampard, Kalou and Florent Malouda all had chances to add to the tally, but in the end there was little need as all the hard work had been accomplished late in the opening 45 minutes.

Towards the end there was time for Torres to make a cameo appearance. The Spaniard and Chelsea fans yet again frustrated although he did have the ball in the net in the 82nd minute, only to be denied by the offside flag.

Next up a home game against Birmingham on Wednesday not forgetting that there is still a chance of Chelsea silverware this season for our youngsters.

They play the second leg of the Youth Cup Semi –final against Manchester United at Old Trafford on the same night going into that game with 3-2goal advantage.

“Opinions expressed in post content are those of the writer and the CSG holds no responsibilty with regards to content, we will however monitor all posts and edit as deemed appropriate”