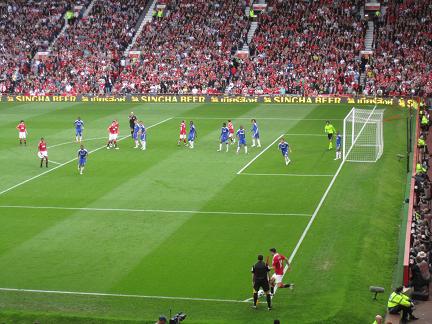 Manchester United moved one point away from a record 19th league title as they saw off our challenge at Old Trafford.

For us it was a disappointing display after battling back into the title race and now we have to cling onto the very unlikely hope that both Blackburn and Blackpool can somehow beat United to prevent them taking the Premier League crown away from Stamford Bridge.

As expected, Didier Drogba was preferred to Fernando Torres at head of the Chelsea attack, with Saloman Kalou given a start on the wing as a reward for his winner against Tottenham Hotspur.

United brought in John O’Shea at left back as Patrice Evra was forced to miss out with a thigh injury and Hernandez, who scored the last time the teams met in the Champions League, was once again chosen to partner Wayne Rooney up front.

Not long ago we were 15 points behind and looking like it was going to be a trophy-less season, but we came into the match with the chance to move back into first place.

However, Man Utd. were 1-0 up after 36 seconds and it was the two players who had scored in our recent Champions League meeting who combined to give them the lead.

Park-Ji Sung moved into the Chelsea half before slipping a through ball past the outstretched foot of David Luiz into the path of Hernandez who confidently slotted it past Petr Cech to send the home fans into raptures.

Ancelotti remonstrated with Luiz straight after, but things didn’t get any better for the Brazilian defender who endured a torrid afternoon, in marked contrast to his goal in the reverse fixture.

We were stunned and then had to be grateful for a flying save by Cech to his right to keep out a Rooney shot from around 30 yards which was heading straight into the corner.

It was one-way traffic and Hernandez came close to scoring again.

Ryan Giggs dribbled his way to the edge of the Chelsea box, before laying it off to Park who curled in a lovely cross which landed over Luiz and just evaded the Mexican striker who arguably should have done better.

Players such as Park and Rooney were giving us no time on the ball and Rooney came close to scoring again when he dragged his shot form the edge of the area just wide of the right-hand post.

The impressive Park was more than justifying his selection ahead of Nani on the wing and he won a corner after his swerving shot from the left was parried by Cech at his near-post.

Giggs took it short and after stepping past Kalou he whipped in a brilliant cross which went over the head of Luiz and was headed home by Vidic.

The lead was nearly halved immediately, with us winning our own corner which was flicked on by John Terry for Kalou to head straight at Van der Sar from a few yards out, before Ivanovic flicked the rebound into the side netting.

On the half hour mark, Kalou was tripped around 30 yards from goal and Drogba stepped up to hit the free kick over the wall and towards the bottom corner, but Van der Sar got down low to his left to parry it away. Moments later he had another free kick from a few yards further in on the other side, but this one went comfortably wide of the goalkeeper’s right-hand post.

Antonio Valencia and Rooney played a one-two which set the winger free down the right side and only a last ditch sliding tackle from John-Obi Mikel prevented Hernandez from reaching his cross in front of goal.

The halftime whistle was blown soon after to loud cheers from the Old Trafford crowd.

With goals needed in the second half, Ancelotti resisted the temptation to bring on Torres or Nicolas Anelka, instead bringing on Ramires and Alex for Mikel and Luiz, whilst United replaced O’Shea with Jonny Evans.

We started the second half in brighter fashion, but were fortunate not to give away a penalty, as Valencia’s cross hit the outstretched hand of Lampard who was diving in to block it.

Moments later, Kalou went over in the United penalty area after contact by Vidic, but again nothing was given by the officials.

On the hour mark, Ancelotti brought on Torres as his last throw of the dice, replacing Kalou, but our only threat was coming from Drogba, who hit a shot narrowly wide.

From nowhere we pulled a goal back, as Ramires’ deflected cross off Evans was flicked on by Ivanovic to Lampard who poked in from a few yards out.

The two goal lead was almost immediately restored, as Ashley Cole was robbed by Valencia. The ball fell to Hernandez who squared it to Rooney, but his tap-in was blocked by a diving Alex when it looked like the ball was going into the net.

Lampard’s goal left us 20 minutes to try and salvage their season and although we started to play better we were thwarted by a well drilled United defense.

In a frantic last 10 minutes, both teams had chances to score, with Rooney having three in quick succession.

His first effort from the edge of the box was dragged wide, then he was through on goal but after rounding Cech his shot was saved before moments later having a shot deflected over by Alex.

Hernandez had an even better chance a few minutes later, but he headed Valencia’s drilled cross over the bar from six yards out.

Torres had been largely anonymous since coming on when he had a chance to salvage a point for us, but his shot from just inside the box was dragged wide before Hernandez reciprocated at the other end.

Man Utd were able to close the game out relatively comfortable and effectively seal a record breaking title.