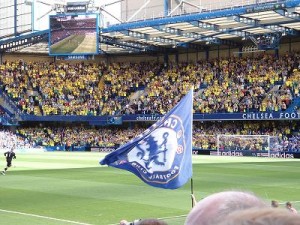 After the visit of West Brom last Sat, it was now the turn of The Canaries to come and try to take some points back to Norfolk.

After only 6 minutes, Jose Boswinga collected the ball outside the penalty area and let go a stunning shot which flew in the top corner and Chelsea were one up.

The style of attacking play that Villas-Boas was showing was a pleasant relief to the drab ‘side to side’ football we witnessed last Sat. The new manager boldly played both Torres and Drogba up front and it was proving to be a success until, unexpectantly, the foot was taken off the gas and we seemed to struggle against a very hard working Norwich side.

The second half continued in the same vein and after 63 minutes, Hilario came out too far, missed the ball and collided with Ivanovic and Holt looped the ball over the Chelsea keeper and it was one each.

Norwich looked dangerous on the break and their keeper was having the easier day! And it wasn’t till second half subs when Anelka, and new man, Mata, entered the scene, did we look like getting anything from this encounter.

Torres was substituted by our other new man Lukaku on 83 minutes and again, looked very lively up front.

A superb through ball from Anelka on 82 minutes saw Ramires bought race through the Norwich defence only to be bought down in the penalty area, the keeper was shown a straight red card and the visitors were down to ten men, Lampard scored from the spot. Juan Mata opened his account on his debut in 11 minutes of injury time, most of which was for a bad collision between the Norwich keeper and Didier Drogba, Drogba was unconscious for half an hour and had been to hospital for scans, the good news is he is due out soon and there was no serious damage.

Not altogether a convincing performance but another 3 points in the bag and still to find the right formula, things can only get better.

We now have a International break before we all head up to the Stadium Of Light for an away clash against Sunderland in two weeks time.