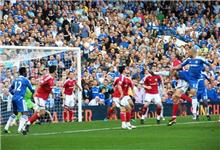 Goals from Nicolas Anelka and Florent Malouda gave Andre Villas-Boas his first win as Chelsea manager, but only after we had been given quite a scare by a stubborn West Bromwich Albion side.

The manager made two changes to the starting X1 held to a draw at Stoke last weekend, with Hilario replacing the injured Petr Cech in goal and Nicolas Anelka preferred to Florent Malouda in attack.

The visiting fans may have travelled to west London fearing a repeat of last season’s 6-0 mauling at Stamford Bridge, but it immediately became apparent that this would be a completely different game.

Hodgson’s men began in confident mood, pressing high up the pitch with Shane Long and Somen Tchoyi looking to capitalise on any mistakes in our defence.

Their positive approach yielded immediate dividends. Long picked the pocket of Alex just over the halfway line after a slack pass by Ramires, shook off the defender’s desperate attempts to recover as he raced through on goal, and coolly slotted home past a helpless Hilario to give his side the lead with just four minutes on the clock.

The early goal rattled us and we showed little sign of being capable of breaking through the Baggies’ massed defence. Salomon Kalou drifted dangerously in from the left wing, but his shot failed to test Ben Foster, instead sailing high into the stands.

Worryingly, it was West Brom who looked likeliest to score next, with the classy Chris Brunt at the centre of much of their attacking threat. He seemed to find acres of space on the right flank before releasing Paul Scharner, whose firm drive stung the palms of Hilario.

Moments later, Hodgson’s men wasted an even better opportunity to double their lead. Brunt looped a ball over the head of John Terry as both Long and Tchoyi broke our offside trap, but his attempted cross was too firm and denied his team-mate what would have been a simple tap-in.

Villas-Boas replaced Kalou in favour of Malouda to try and inject some urgency into our play, and we responded with our first spell of sustained pressure as the half drew to a close.

Ashley Cole forced Foster into a save with a swerving 25-yard drive, and then Anelka had a decent penalty appeal turned down after being felled by the Baggies keeper.

Right on the stroke of half-time, Alex’s dangerous driven low free kick was redirected by Mikel, but straight into the grateful clutches of Foster.

Nerves were jangling amongst the Stamford Bridge support especially as the second half began with no visible reaction. Once again, it was the visitors who started more brightly, with Long and Tchoyi continuing to find space in and around our back four with alarming ease.

But then, against the run of play we found ourselves level. Having again being denied a penalty when Lampard fell under pressure from Jonas Olsson, the ball broke to Anelka, whose low shot deflected off the Swede’s leg and rippled the net just inside the far post.

It brought Stamford Bridge to life as Chelsea supporters began to get behind the team and urge them forward.

However, West Brom almost restored their lead immediately, with James Morrison’s hanging cross finding Scharner unchallenged at the back post, only for the Austrian to head over with the goal gaping.

But, by and large we were now in the ascendancy, and only a good reflex stop from Foster and a heroic last-ditch block from Steven Reid denied first Anelka and then Malouda from putting us ahead.

With half an hour remaining AVB substituted Fernando Torres in favour of the more physical presence of Didier Drogba, and five minutes later replaced Alex with Branislav Ivanovic. Alex made his way straight past the bench, down the tunnel and with rumours of a possible transfer to Juventus this may well have been his last game in a Chelsea shirt.

We seemed galvanised by the new arrivals and camped ourselves in the West Brom half with Anelka, Drogba and Lampard all having decent chances without converting.

The visitors were under pressure, a fact highlighted by Foster’s crazy decision to sprint 30 yards from his goal after Anelka had been released down the right flank. But Anelka chose to try and find the net rather than rounding the onrushing keeper and sent his one touch shot just wide of the post.

With seven minutes remaining we broke West Brom’s resistance as Bosingwa jinked between two Baggies defenders. His accurate low cross found Malouda at the back post and he fired home.

Although we never looked entirely convincing at the back and Stamford Bridge was subjected to a couple of nervy moments towards the end we ultimately held on for a hard-fought win.

We Know What We Are