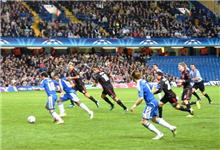 We got our UEFA Champions League campaign off to bright start by securing a 2-0 victory over Bayer Leverkusen yesterday evening.

Fernando Torres played provider for both goals as David Luiz applied a stunning finish for a 67th minute opener before Juan Mata slotted home in the dying seconds of stoppage time.

The win sees us take an early lead in Group E after Genk could only manage a goalless draw at home to Valencia.

Andre Villas-Boas’ side saw plenty of chances in a goalless first half with Torres and a lively looking Daniel Sturridge coming close on several occasions.

Patience paid off when Luiz found the opener after the break and Mata put the win beyond doubt.

AVB’s team selection said everything about his priorities in what is his biggest week since taking charge, with neither Captain John Terry nor Frank Lampard in the starting XI ahead of Sunday’s crunch Premier League trip to Manchester United.

There was a pacey opening with a second minute cross from Daniel Sturridge which Torres got on the end of but narrowly hooked over.

Both sides then saw goals controversially disallowed, Omer Toprak’s header from a corner ruled out for pushing and Torres’ flick denied by an offside flag against Raul Meireles, who tried to back heel the ball home.

Torres was then booked for a lunge on Simon Rolfes before missing a good opportunity to score when he hesitated trying to convert Mata’s 10th-minute cutback.

Sturridge almost caught out Bernd Leno with a near-post drive, beating the goalkeeper to Jose Bosingwa’s cross and driving a long-range blast just past the upright.

Mata also shone once again, his free-kick on the stroke of half-time nodded straight at Leno by Branislav Ivanovic.

Ivanovic was needed at the other end 10 minutes into the second half, a crucial interception denying Andre Schurrle, who then created a gilt-edged chance for Michael Ballack, Petr Cech racing off his line to block the former Chelsea star’s shot.

Torres had also nodded straight at Leno, while Luiz was booked for hauling back Schurrle, who poked straight at Cech after being played in by Stefan Kiessling. But the save of the night came from Leno, who turned Sturridge’s first-time finish from Ashley Cole’s cross onto the post.

Villas-Boas then raised eyebrows by taking off Sturridge and Meireles for Lampard and Nicolas Anelka, while Leverkusen responded by substituting Renato Augusto for Ballack.

It was Villas-Boas’ changes that reaped instant rewards. Luiz surged forward from the back, fed Cole, who found Torres, and the striker laid off for the former to find the bottom corner from 15 yards.

Kiessling might have equalised when he sent a diving header wide but our tails were up, Anelka wreaking havoc and Mata forcing a brilliant fingertip save from Leno.

Luiz, who earlier hurt himself making a tackle, was withdrawn to a standing ovation, with Alex coming on before Anelka was denied what looked a perfectly legitimate headed goal by an offside flag.

It was a bit of a nervy finish until Mata finally settled things by getting the goal he so richly deserved when the ball was put on a plate for him by Fernando Torres to pass into an empty net.

The biggest test of the season so far now lies ahead with a return to the Premiership and a trip to Old Trafford on Sunday.