Scousers on the Roof 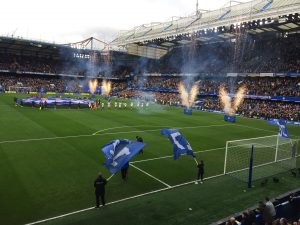 [1]In the News: Dave has followed Kante and Alonso is signing a new long term deal. Hurrah. Ozil, who is apparently being courted by Inter Milan, was missing today from the north London Derby because he’s having “back spasms” which have already lasted longer than the spasm of him giving a sh*t at the beginning of the season. Chequebook Pulis says it’s not easy to the win the league when you can no longer raid Sp*rs for players. Was never really route one in the premier league, was it? Besides, he could raid the Bank of England and every football club in Europe and he’d still be on course for having his standard third year meltdown. Perisic has been waxing lyrical about how relieved he is that he didn’t go to Manchester, and you have to wonder who’d sign up for that madness mid-season that’s worth anything. Elsewhere AC Milan allegedly want Cesc and The Zlatan, of course Ashley Cole is said to be looking for a Championship club too after being let go by LA Galaxy. Yes, the transfer twattery is about to begin. My prediction? That 99.9% of what you are about to read in the newspapers over the next month and a half is complete b*llocks.

The Others: Bournemouth gave us all a bit of false hope at one stage, Ver-wrong’un got his just desserts. Horrible little sh*t. Nothing better than Sp*s losing, after going ahead having been behind and getting all gobby, and that little rat being sent off. It could only have been better if he’d tripped over the fourth official and broken his ankle on the way out. One of their fans has been arrested for throwing a banana skin at Aubameyang. I really hope he’s not a racist at all, and that he’s actually been arrested for being a gluten denying, vegan hipster who was supplementing his charcoal activated croissant breakfast and had nothing else to hand save for some chia seeds. Next time eat a pie you sad b*stard.

Us: Don’t know how Luiz kept his place, but he continues his record of playing every minute of every game in the league so far. And didn’t we feel every one of them at Wembley. The Beard rightly got a start. Not particularly fair on Barkley or Loftus Cheek that neither of their performances was good enough to get in over Kovacic, but then life’s a bitch I suppose.

Them: Claudio returned for a visit, yay! Along with the finely chiselled, comic-book-hero jawline that makes Scott Parker visible a mile off.

You thought noon was a sh*t kick off time? Try being five hours behind. And dragging your half-asleep a*se 21 blocks in the pouring rain to get to the bar for kick off. Despite this there were actually tourists out in Times Square before 6:30 taking selfies. Mad b*stards. On arrival I was soggier, limper than Jordi Alba rolling around on the floor clutching his face when no-one’s touched him. Not even any gin to reward me at the other end, for in NY you are allowed to get sh*tfaced on beer as early as you like, but you can’t have gin till lunchtime. Boo.

Kepa was forced into a save after just 20 seconds. In fact Fulham were very spritely, but it didn’t do them any favours. After all that dross about Kante in the last week, he was at his best after three minutes, playing in his much publicised, wrong position when he poached the ball and hit it out to Pedro Pony, who kept his composure to go around the keeper and slot it in at the far post. Welcome progress after the last month when we’ve still been half asleep after half an hour, I hear you say. Sort of. We were in full flow soon afterwards, but Fulham by no means looked like peasants, and Alonso’s range on crosses into the box was so off that he kept putting them out for throw ins on the other side. We’d had no other chances to speak of by the time twenty minutes ticked by. Hazard was almost at his magical best to cut a cheeky ball out to The Beard on 23, but the angle was too narrow. Other than that our talisman was quiet in the opening spell. Fulham’s only joy approaching the half hour was a free header in the box, but nothing came of that either. They gave the ball away in almost the exact same spot that had caught them out again, ten minutes before the break, but The Beard was smothered on the near post and couldn’t fashion a proper shot out of it. “Morata would have buried that” said Mowgli. He was on his second pint. Before 8am. 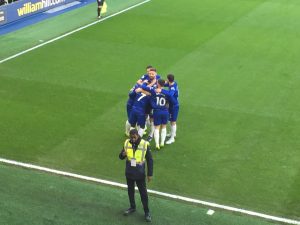 [2]Suddenly Eden was on fire. An outstanding little run from Dave put the ball into the box The Beard on 42, the keeper, who looks like a drunker, poor man’s version of Hugo Lloris, was all over it. “Morata would have buried that,” said Mowgli. If I’d had a brick to hand I would have contemplated hitting him with it.

Off they went at half time. I can’t think of anything witty to put here, because I’m still 100% sober and New York won’t give me gin for another four hours. Half time punditry came courtesy of Robbie Earle dressed up as a used car salesman. From 1976. He looked like he’d dropped out of the battle of the news crews in Anchorman.

Fake Lloris was forced to make a save on 48 from Pedro, as we came out swinging, but so were Fulham with Toni Rudiger forced to put a block in just afterwards. Other than that not much doing, and the result is never certain at 1-0. When you are watching Chelsea, at any rate. On 64 Kepa was forced to make a save after Alonso gave the ball up on the touch line. Callum Chambers of all people. I was about to say we were making him look good then he went to have a shot and ended up giving us a throw in near the halfway line. Bellend.

Subs were up. Loftus Cheek for Kovacic on 66, then Morata with his new hard-looking hairdo. It should finally have been two when Hazard nicked the ball in the box and teed it up for him. Fake Lloris saved from Eden and Alvaro came storming in for the rebound. Row Z. Morata is the footballing equivalent of a gluten-free, vegan hipster wearing ultra skinny jeans and riding a penny farthing round Horton. “Morata would have buried that” says Mowgli. I didn’t have the energy to point it out to him. Zappacosta for Alonso rounded things off, if he was not feeling right it might have explained a bit of an off showing from him today.

We pottered on for five minutes more and then finally finished them off. 81 and along comes Eden to play in Ruben. Shocking from the keeper to let it go round the outside of you like that, but not a f*ck was given by the blue half of West London. Good outing for Loftus Cheek today, two appearances this week and couldn’t really have done more to justify his time on the pitch. In the meantime a petulant yellow for Morata. Must be a day that ends in a Y. That about rounded off anything of note, apart from when the TVs cut out and the regular NY blues started chanting “Scousers on the roof.”

Refwatch: Craig Poorson. Wetter than we were. But not as dismal as he normally is. I’m imbued with Christmas spirit at the bar in the Bank or America’s winter village in Bryant Park, so I don’t care that much about him today. Well, imbued with gin at least

So: Far more entertaining than the game was the fact that we hung about with the El Salvador Chelsea massive to eat breakfast and witness the carnage that made up the first half of the north London Derby. Nothing funnier than Mike Dean giving a penalty against the Goons when Son fell over his own feet and started crying. That’ll be another year of moaning that he’s got it in for them. To add to the twenty so far. For us? Three points banked, which we desperately needed before the visit of City next week. At which point I’m getting smashed before kick off and hoping they don’t score more than three based on our showing against Sp*rs.

​I’m still desperately collecting for the benefit of a group of children who will be homeless this Christmas and staying in a shelter as a result of domestic violence. Money will go towards presents, winter clothing and equipment needed for the home in SW London. Any donations can be sent via PayPal to Alexandra.churchill@hotmail.com [3] or you can contact me for details for transfers. Anything you can spare this holiday season is greatly appreciated.

You can see all ACs Blogs here [6]