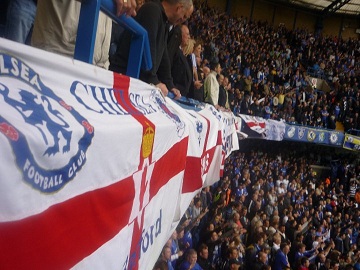 I cannot speak for other Chelsea supporters but I was quite stunned a couple of weeks ago when it was announced out of the blue [if you can excuse the pun] that Chelsea may have been required to compete in a play-off match with Arse-Nil in order to determine who would finish third in the Premiership if we and our lovely neighbours from Norf London were tied on the same points and identical goal difference. Of course, the chances of such a happening being realised on the final day were probably about 100-1. They involved all manner of crazy results for us and the trophyless bunch ending with the exact same stats.

However, I thought that it was a bit of, how can I say it, taking the urine, for the English FA to demand that Chelsea [after an epic season’s journey of 69 matches] should be required to put their weary bodies on the line in a hastily-arranged extra fixture. Of course, it wouldn’t be fair to Arse-Nil either, as it may have involved the club with no silverware losing a third time to the club that keeps winning silverware!

Anyhow, what irritates me is the latest outpouring of rough justice that we have been on the receiving end of. Firstly, could the English FA not have applied other criteria to separate two teams tied together in unholy matrimony? The logical one is the head-to-head matches of the two teams. That could have decided who should be third. Or failing that, how about the team that had the least red cards, or the least red and yellow cards.

It smells suspiciously like some sadist [and certainly not a Blues follower] dreaming up an extra fixture which might be a money-spinner but which wouldn’t be doing the exhausted teams many favours. What about the international commitments at this time of the year too for the various players?

However, what really dismays me is how Chelsea were evicted from the Champions League even though they had superior goal difference to Shaktar Donetsk, but lost out narrowly on account of the head-to-head encounters against them. Yet this same rule should have been applied to the possible dispute over who finishes third.

Why didn’t the FA elect to apply the same rule as UEFA. Why should Chelsea be punished by the head-to head ruling in the Champions League group and yet not benefit from it in the Premiership? We beat Arse-Nil 2-1 home and away and still the FA could have asked us to beat them again if our goal difference and points were the same.

It all adds up to double standards and more potential injustice for Chelsea. Thankfully our troops did the business against Everton to prevent such nonsense, while Arse-Nil staggered over the finishing line in fourth place.

They can congratulate themselves on ‘reaching’ the Champions League, but a two-legged qualifier in August for a team still rusty from the summer vacation is no picnic or cause for celebration!

A Couple Of Questions (by Gary Watton)