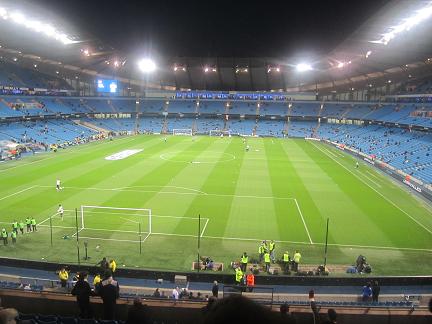 Chelsea headed for the City of Manchester stadium for this re-arranged fixture from last Monday night, knowing that only a professional performance would be enough to secure Di Matteo’s fifth unbeaten game in temporary charge.

City were without some key players and had showed signs of starting to lose points so this was probably the best time in the season to meet them at their ‘unbeaten this season’ ground, it was always going to be a challenge when you see the talent bought by the ‘other’ Manchester club but, many Chelsea supporters travelled up the M6 (and a few City fans too looking at the cars we passed!) with confidence that we could return home with at least a point.

From the kick off they came at us and were probably unlucky not to go ahead when they hit the bar then, slotted wide after a mistake from Frank Lampard, but all in all I thought we deserved to go in to the break level. The second half started similar to the first but on sixty minutes a corner from Juan Mata saw a bit of a scramble in the City defence and Gary Cahill netted after a deflection sending ‘England now number one keeper’ Joe Hart the wrong way, and it has to be said, against the run of play.

City supporters were stunned into even deeper silence, the place had been like a morgue up to then anyway which was a surprise as I always thought the Ethiad (or whoever the Arabs have sold the name to?) was a noisy ground, the amount of empty seats probably didn’t help (their end and ours). I have always have a small bit of respect for City fans, they are not like the glory hunting following that United get and most have been there, seen it and done it so, I was surprised to witness the awful atmosphere last night, they only actually came into life when they equalised from an Aquerro penalty on seventy eight minutes, this after a shot in the box hit Essien’s hand, and from that point you just felt it wasn’t going to be our night.

And so it proved to be when, with five minutes remaining, the returning Messiah (sorry Tevez) put in to Nasri to score the winner with a little chip over Petr Cech and once again we left wondering how we came back with nothing, even more gauling knowing Spurts had nicked a point at home to Stoke and Arsenal had beaten Everton at Goodison Park, the only highlight on the way home was hearing the other Scousers had messed up at QPHaaaa although, to be fair, couldn’t really care less who won that one.

So, next up is a ‘do or die’ against Tottenham at The Bridge Sat lunchtime, a game which could decide where our, mediocre to now, season will end up!