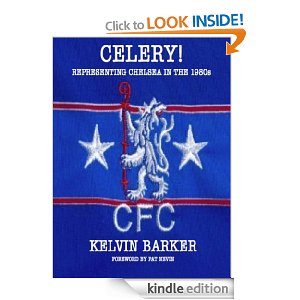 A little gem… make sure you secure a copy.— Blue and White Army

Once I started reading it, I couldn’t put it down.— Chelsea Supporters Group

Without a shadow of a doubt, this is the best book I have ever read about Chelsea Football Club.— CFCnet

Celery! Representing Chelsea in the 1980s is a definitive period piece of True Blue writing which captures in amazing detail the trials and tribulations, the laughter and the tears, and the joy and pain of both watching and playing for Chelsea Football Club during a truly remarkable decade in the club’s history.

From Kelvin’s own amusing tales of hugging skipper Colin Pates on the hallowed Stamford Bridge turf and serenading Bob Geldof in the King’s Road, through to the incredible behind-the-scenes stories as told by the players themselves – the mysterious case of Mickey Thomas’ disappearing gold chain, how a kick in the head made Joey Jones a fans’ favourite, the role physio Norman Medhurst’s hair played in David Speedie’s departure from the club, and many more – this book lays bare the facts of representing Chelsea in the 1980s, as recalled by those who were there.

“A little bit of nostalgia mixed in with some extraordinarily accurate history …Celery! provides an authoritative education on an important time for the club,

Without a shadow of a doubt, this is the best book I have ever read about Chelsea Football Club”.

Is The Long Term Character Of Chelsea’s Support At Risk?