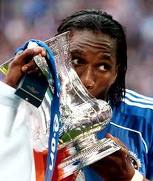 From the official  site:

The draw for the fifth round of the FA Cup has given us a home tie against Birmingham City.

The game will be played on Saturday 18th February with a 12:30 kick off.

Birmingham, currently seventh in the Championship, reached this stage by beating Sheffield United away 4-0 on Saturday. In the third round they overcame Wolves after a replay. They are managed by Chris Hughton.

In total Chelsea and Birmingham have been drawn against each other eight times in this competition. The most recent occasion was the fourth round in 2005 at Stamford Bridge when we won 2-0 with Robert Huth and John Terry the scorers.

We also beat Birmingham at home on the way to winning the Cup for the first time in 1970, also beating Queens Park Rangers away in that run to Wembley.

The full draw is:

3 thoughts on “Chelsea At Home To Birmingham In FA Cup”