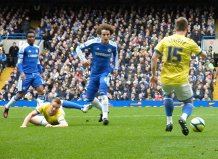 We were held to a 1-1 draw in the FA Cup by Birmingham City and will now face a replay against Chris Hughton’s well drilled side.

The game started sluggishly as we struggled to penetrate Birmingham’s five-man midfield. The Championship side were also dealt an early blow as captain Stephen Carr was forced off after just 12 minutes with injury, Jonathan Spector replacing him.

We fell behind after 20 minutes as Keith Fahey’s corner from the left was flicked on and the ball found Murphy unmarked at the far post and he shot the ball home from six yards out.

Moments later and we were given the chance to draw level. Ramires carried the ball into the penalty area and surged past Wade Elliott who could only bring him down, Martin Atkinson pointing to the spot.

Juan Mata stepped up confidently but saw his effort tipped on to the post by Doyle, sprawling down to his right.

We dominated in the search for an equaliser; David Luiz set off on a run and was halted by Jordon Mutch who was booked. Luiz then hit a dipping free-kick from 30 yards that needed tipping over by Doyle.

Sturridge then latched onto a Fernando Torres knock-down and fired over before Mikel put a long-range volley just wide.

Juan Mata’s header was the last of our first half chances as we went in for the break behind with much of Stamford Bridge making their displeasure known.

Andre Villas Boas changed his side for the second period, introducing Didier Drogba in place of Torres and  he looked to get into the thick of the action immediately just failing to latch on to a Raul Meireles chipped pass.

After ten minutes there was another attacking swap as Mikel was replaced with with Salomon Kalou.

Mata fired an effort wide before we finally levelled the scores, Ivanovic picked out a cross from the right and Sturridge was there to meet the ball with a firm header that nestled in the corner of the net.

We were now playing with improved confidence and beginning to dominate with Mata again at the heart of things, firing a dangerous ball across Birmingham’s six-yard line before Meireles hit a deflected effort just over the bar.

Jordon Mutch hit a long-range free-kick that Cech saved comfortably before we made our final change, Frank Lampard sent on in place of Mata.

Ivanovic tumbled in the Birmingham area but no penalty was awarded before Redmond spurned a good chance at Cech’s goal. Late on and Frank Lampard hit a free-kick into the wall but we were unable to find a winner.

It leaves us with a replay away to Birmingham City on the 6th March, but in the meantime our next challenge is on Tuesday in the Champions League away to Napoli.