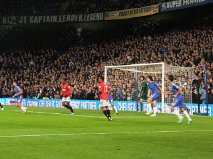 For the second time in four days we played out a thriller at Stamford Bridge against Manchester United gaining some revenge for our Premier League defeat by winning 5-4 and booking our place in the quarter-finals of the Capital One Cup.

As expected both clubs made significant changes to their starting line-ups, Roberto Di Matteo handed starts to Cesar Azpilicueta, Oriol Romeu, Victor Moses, Lucas Piazon and Daniel Sturridge while the visitors made 10 changes to their team, with Rafael the only man to retain his place from Sunday’s win.

The game started at pace with Manchester United once again as on Sunday taking the lead.

Petr Cech’s short kick out to Romeu, allowing Anderson to nick the ball and find Ryan Giggs who finished clinically opening the scoring.

The goal sparked us into life and by the half hour mark we were level. Victor Moses burst into the box only to be brought down by Alexander Buttner, giving the referee an easy decision to point to the spot. Up stepped David Luiz who smashed the ball confidently past Anders Lindegaard who got a touch but could not keep it out.

With the scores level we began to dominate possession but fell behind again just minutes before the break. Anderson picked out a great pass to Chicharito after Luiz had lost the ball on a forward run and he finished past Cech for his sixth goal in nine appearances against Chelsea.

The second half began in much the same vein and within minutes we were back on level terms. A Mata corner from the left was thundered home by Gary Cahill, the ball clearly crossing the line despite Rafael’s attempts to head clear.

Back came United once again as just three minutes later Nani swapped passes with Anderson and raced into the box before dinking over Cech to put United ahead for the third time.

The chances continued to flow for us with Azpilicueta missing the best opportunity when free at the back post before Juan Mata was left calling for a penalty after his cross hit the arm of Michael Keane, the referee waving the appeals away.

As full-time approached we looked to be heading out of the competition but once again there was to be late drama.

Another penalty! …….this time after Scott Wootton clumsily fouled Ramires, allowing Hazard to coolly roll home a spot-kick to send the game into extra time.

The momentum was very much now with Chelsea as we took the lead for the first time in the game in the seventh minutes of extra-time. A poor header by Wootton, left Sturridge with just Lindegaard to beat, and he made no mistake.

There was still time for more goals with Hazard twisting and turning past a host of United defenders before finding Ramires who tapped home the fifth.

United refused to give up and with seconds remaining Giggs scored his second of the night from the penalty spot after Azpilicueta fouled Chicharito, but it was to prove too little too late.

Chelsea will now face an interesting away tie to Leeds in the next round of the Capital One Cup on the 19th December.