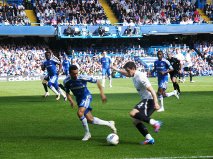 Tottenham maintained their five-point lead over us in the Premier League as the London Derby ended in a 0-0 stalemate at Stamford Bridge.

In his sixth game in charge Roberto Di Matteo made five changes to the side which lost 2-1 to Manchester City in midweek. Captain John Terry and full-back Jose Bosingwa returned in defence in the place of Branislav Ivanovic and David Luiz, whilst Raul Meireles and Fernando Torres made way for Daniel Sturridge and Didier Drogba. Jon Obi Mikel dropped to the bench for Michael Essien.

Tottenham came into the match having never won a Premier League game at Stamford Bridge (in fact never won at The Bridge in 20 years! – Ed).  Early on several nervy passes saw them lose possession and they were nearly opened up within five minutes as Ramires passed inside to Drogba only for his clever flick to run just beyond Frank Lampard racing into the box.

Tottenham were almost caught cold again just 10 minutes in as John Terry’s long pass almost found Drogba, unfortunately though he was unable to control the ball.

Both sides then seemed content to pass the ball along the back without bursting forward in fear of leaving themselves exposed.

Runs from deep seemed to be providing our best chance of breaking a stubborn Spurs backline but Frank Lampard saw penalty claims waved away as he made contact with William Gallas whilst trying to shoot following a late burst.

Some desperate defending from Spurs led to a counter-attack which saw Adebayor pass two Chelsea defenders before failing to pick out Kyle Walker.

Following a brief interlude for a Drogba injury, Ashley Cole then found acres of space down the left hand side but couldn’t make contact with the ball and saw his cross bounce into the arms of Brad Friedel.

For much of the half Spurs had failed to show the gung-ho attacking nature for which they have been widely praised this season but they almost went in at half-time with a barely deserved lead. Luka Modric setting up Van der Vaart, only for him to see two efforts blocked brilliantly by Petr Cech and then Ashley Cole on the line before Adebayor headed over.

Early in the second half Tottenham pressure led to a Chelsea break which saw Scott Parker just get enough on Drogba’s cross-field ball to Ramires, who would have been in on goal.

Gallas’ inability to control Drogba again then led to a chance as he headed into the path of the onrushing Sturridge, who shot wide of the far post.

With our defence looking under more pressure from Spurs in the second half, Di Matteo replaced Bosingwa with Luiz.

Given the cautious nature of the match, it was clear that it would take something special to break the deadlock and Mata almost provided that with 20 minutes remaining. He stepped up to hit a free-kick from 25 yards and curled the ball onto the post with Friedel stranded.

Torres came on in place of Essien, whilst Van der Vaart and Sandro made way for Saha and Jake Livermore.

The substitutions did seem to add more attacking impetus to both sides and there was a scare for us moments later as Adebayor rounded Cech following a ball over the top. Gary Cahill brilliantly racing back to slide in and clear. Gareth Bale then saw his header crash back off the bar from the subsequent corner.

Both sides attempted to push forward in the closing stages with four minutes of added time given when towards the end of extra time Bale’s low free-kick almost caught Cech by surprise but the Chelsea defence held firm.

Having seen his side fail to close the gap Roberto Di Matteo admitted it would now be an uphill task for us to finish in the top four and secure a place in next season’s Champions League.

“It’s going to be difficult, from the day I was appointed we all knew it would be but there are still eight games to go and we will try to win as many as we can to gain fourth spot.

To make the gap up we will have to win all of our games, you look at the fixture list and you just have to try to win the next game.”