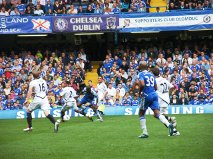 Despite seeing red Fernando Torres found the net for us in a 4-1 victory over Swansea City.

He opened the scoring in the first-half but just 10 minutes later was back in the dressing room following a two footed challenge on Mark Gower. A double from Ramires and one from Didier Drogba, secured the result while Ashley Williams’ goal was a consolation for the visitors.

Swansea, were reasonably comfortable early on keeping a good shape and restricting us to long range efforts. On the 15th minute Raul Meireles blasted over the bar and that is as good as it got in the opening twenty minutes for us but as the half went on we stepped it up a gear.

Fernando Torres became more involved in the game and he didn’t have to wait long until he was on the score-sheet. After great work from Juan Mata on the edge of the area, Torres received the pass over the defence and was able to control superbly to finish into the far corner of the net on the half-hour mark.

It was clear that the Swansea defence were struggling and it was only a matter of time when we doubled our lead five minutes later. Ashley Cole delivered an inviting low cross into the box and Ramires latched onto it to finish through Michel Vorm’s legs.

Stamford Bridge began to relax, Chelsea fans enjoying the match with the Welsh side preparing themselves for a long afternoon.  But shortly afterwards we were reduced to 10 men.

On the 40th minute, Mark Gower had the ball on the left side looking forward until Torres came sliding in with studs showing. Mike Riley didn’t hesitate in giving him a straight red.

Despite the advantage, Swansea struggled to implement any pressure in the last five minutes before the break.

Brandon Rodgers brought on Wayne Routledge at the start of the second half hoping to provide some width and make the extra man tell. It had a positive effect with Swansea having several chances, Leon Britton pulling the strings in the midfield.

Ten minutes into the second half, Ashley Williams should have pulled one back for the Welsh side when he found himself in space in the area and headed a Angel Rangel cross towards goal, but Ramires cleared off the line.

The Swans were almost made to pay when Nicholas Anelka collected the ball in space 25-yards out and unleashed a fierce drive which smashed the cross-bar with Vorm completely beaten.

Swansea continued to push forward but the Chelsea defence looked comfortable as we threatened on the break.

On the 77th minute Ramires controlled a Bosingwa cross and finished brilliantly for his second of the match.

Swansea continued to push forward and they were rewarded for their efforts five minutes from time when Williams ghosted in at the back post and headed home a Gower cross amidst our poor marking.

But it was Chelsea who had the last word, with substitute Dider Drogba turning on Malouda’s pass and steering the ball home.

“With 10 men, we never lost our will to continue to attack and I think it paid off. It was an important win for us based on the last defeat at Old Trafford and showing resilience in the end again after Wednesday.

“It really shows the nature and commitment of these players towards their objectives.”

Next up we return to Champions League action on Wednesday with an away fixture against Valencia.