A second half goal from Didier Drogba helped interim Chelsea Manager Roberto Di Matteo to his second win as we defeated ten-man Stoke 1 – 0.

Stoke came into the game having failed to win a league game against us home or away since 1975 and were done no favours by Ricardo Fuller being sent off for a reckless stamp on Branislav Ivanovic in the first half.

We began encouragingly pressing Stoke deep and forcing an early mix up between Ryan Shawcross and goalkeeper Asmir Begovic that saw the center back’s header land on the roof of his own net.

Gary Cahill found room to bring the ball from defense and then hit a swerving right-footed strike that required Begovic to palm the ball behind for a corner.

John Walters carved out a chance for Stoke when chasing a long ball, he got away with tripping John Terry as the two came together on the halfway line. Walters reached the loose ball and found himself with just Cahill to beat. Perhaps showing a lack of confidence, he saw his shot blocked before finding room past Cahill to slice the rebound wide. It was Stoke’s best chance of the first half.

He chased a long pass and as Ivanovic slid to hook the ball to safety, the Jamaican reacted by deliberately stamping down on the Chelsea defender. It was a simple decision for Andre Marriner to produce the red card.

With Stoke down to 10 we continued to search for the opener and Ivanovic, who was afforded far too much space, played a one-two with Lampard on the edge of the box leading to a looped header that was claimed by Begovic on his goal-line.

As half-time approached, Di Matteo made his first substitution, introducing Mata for Raul Meireles, but it was Ivanovic who pounced on a loose clearance in the visitor’s box and smashed a half volley against the crossbar as we closed the half on a high.

Ivanovic was substituted for Luiz after the break presumably feeling the after-effects of the Fuller stamp.

Chances of the first 15 minutes of the second-half came with long-range efforts from Lampard, Luiz and Terry and we were almost treated to a splendid Drogba goal (pic from Dave Sorrell) as Begovic flew to his left and tipped a shot over the bar. 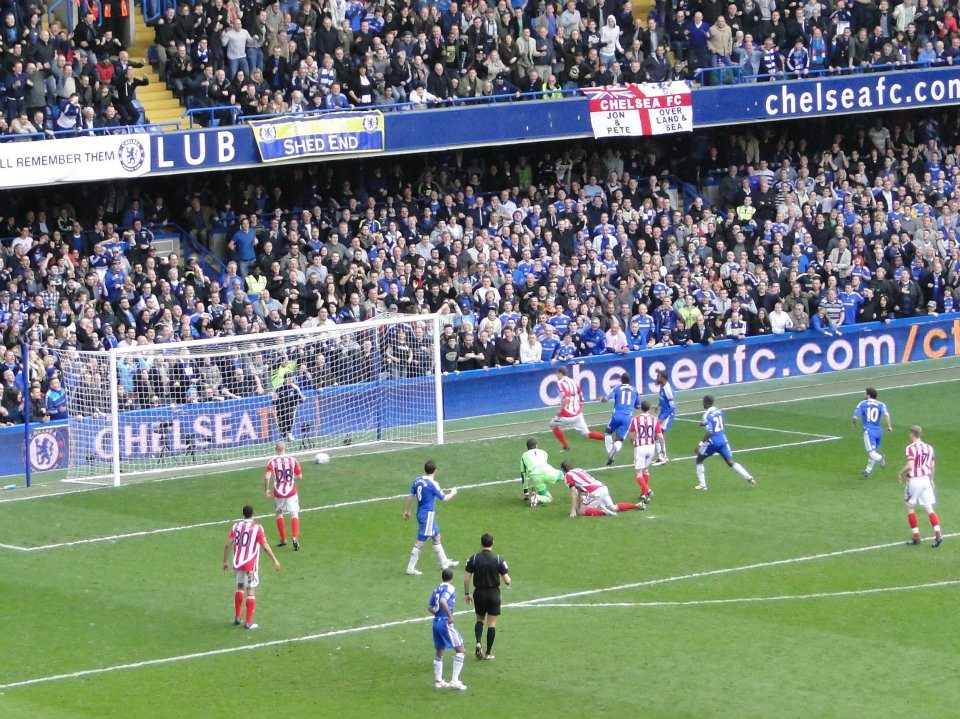 But it wasn’t long until Drogba did find the net.

Mata found room on the edge of the box and slipped the ball into Drogba whose first touch drew Begovic from goal. His second allowed him to round the keeper leaving an open goal for Drogba to tap in and bring relief to Stamford Bridge.

Frank Lampard came close to doubling the lead minutes later but his fierce shot from 25 yards was pushed away by Begovic.

Stoke came close to equalizing with 15 minutes to play as midfielder Andy Wilkinson attempted a 40-yard lob over Petr Cech but fortunately the attempt drifted wide.

As the game neared its conclusion, Mata’s curling free-kick beat Begovic but rebounded back off the upright – the third time in the game we had hit the woodwork.

It may not have been pretty but Di Matteo’s reign has now yielded two wins from two games with the challenge to turn around the second leg of the Champions League tie against Napoli next Wednesday ahead.