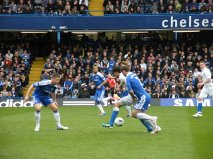 A priceless late winner from Juan Mata kept our hopes of a top four finish alive as we beat Wigan 2-1 at Stamford Bridge.

It was our second Premier League victory on the spin after last week’s 4-2 triumph over Aston Villa and our fourth in succession over the Latics, moving us back above Newcastle into fifth place in the Premier League.

It was a slow start but we were the first to press forward with David Luiz, who made one of his driving runs and drew a foul off Di Santo but the free-kick came to nothing as Wigan were able to clear.

We tried hard to impose ourselves moving the ball around well. Ivanovic won a free-kick after Maynor Figueroa’s late challenge outside the right-hand side of the area, but Drogba was unable to make a good connection with Mata’s cross.

Ryan Bertrand showed some skill on the left early on swinging over a superb cross which fell to Malouda, but his volley ended up rolling out for a throw-in.

Meireles then won a corner which Wigan managed to clear, but we retained the ball and it was eventually worked to Cahill, who unleashed a 30-yard drive which was heading for the top corner until Al-Habsi parried over.

Wigan were well in the game through the first half and at one point Moses turned round Bertrand before hitting a low 25-yard strike, but it was easily dealt with by Cech.

We moved up the other end moments later as the tempo increased, Drogba shrugging off a challenge before fizzing a low effort just wide of the post.

We then had an excellent chance to take the lead 10 minutes before the break. Drogba slotted through Mata with a fine pass and then cut inside with a shot which was denied by Al-Habsi. His parry fell to Drogba, but his header was cleared off the line by Figueroa.

We started with more purpose again in the second half when the ball fell to Mata on the edge of the area and he chipped over to Drogba, who unleashed a low left-footed effort at goal, drawing another excellent save from Al-Habsi.

Still the Latics were holding on but we began to turn the screw enjoying spells of longer possession. The ball fell to Sturridge on the edge of the area, but he slipped as he shot and it flew well over.

On the hour Torres was brought in place of Malouda to join Drogba up front.

Ivanovic then won a free-kick. Mata’s cross was cleared but came out to Meireles who played a first-time ball back in and Ivanovic was there to head home from what appeared to be an offside position, but the goal stood and Chelsea took the lead despite heated protests from the Wigan team and bench.

Wigan nearly equalised immediately as Moses tried to round Cech and the keeper’s clearance fell to Di Santo who shot first time, but Ivanovic was there to clear off the line to protect the lead he had just provided.

As the game moved into the final 20 minutes Martinez made two changes for Wigan, bringing on Diame and Ben Watson for Beausejour and James McCarthy as they searched for a leveller.

Mata had a glorious chance to double Chelsea’s lead soon after as Drogba headed on a long kick from Cech, but he blasted high and wide from the edge of the box.

Drogba slipped a pass through to Sturridge moments later and he tried an effort from a tight angle, but put it well wide.

Wigan hadn’t given up and started to press in the final 10 minutes. As we began to look tired Diame received the ball 20 yards out and unleashed a drive into the corner which Cech could only watch fly in.

Kalou then had a golden opportunity to win it for us as he received the ball in acres of space in the area from a Torres cross but his low effort went into the side netting.

However, with the points looking certain to be shared, Juan Mata won the game in stoppage time, bundling the ball home when Torres volleyed low against the post.

With only a day’s rest we now face a tricky local derby with Fulham on Monday night. John Terry, Frank Lampard, Ashley Cole and Ramires, who missed today’s game due to illness, will have their availability assessed on Sunday.