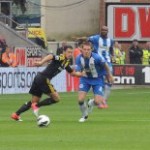 We got our Premier League campaign under way with three points against Wigan as goals within the first seven minutes from Branislav Ivanovic and Frank Lampard secured a 2-0 win.

There was a debut for Eden Hazard who was the provider as we flew out the blocks to take the lead after just two minutes at the DW Stadium. In a swift counter-attacking move Hazard rolled Ivan Ramis in the middle of the pitch before releasing Ivanovic and he made no mistake as he fired home past Ali Al-Habsi.

Wigan were soon two behind as with just six minutes gone Hazard again created havoc on the home side’s defence  escaping a challenge from Figueroa before Ramis came across and bundled him over for a penalty.

Frank Lampard made no mistake from the spot, drilling the ball low underneath Al-Habsi’s arms to put us two goals to the good.

Wigan fashioned their first chance of the half after 18 minutes when Emmerson Boyce crossed over from the right towards Franco Di Santo and, although the former Chelsea player did well to climb between David Luiz and Ivanovic he could only direct his header onto the top of the net.

Roberto Martinez’s side came more into the game as the half wore on as Victor Moses  linked with a possible move to Chelsea came close to pulling a goal back when he flashed an effort across goal but Petr Cech was on hand to divert the ball behind for a corner.

Di Santo could have scored in stoppage time but after racing onto a through ball from Figueroa he failed to beat Cech when through one-on-one.

In the second half Wigan continued to push forward with Di Santo and Moses both shooting wide shortly after the break but then Fernando Torres had the chance to put the game beyond the hosts with his first real sight of goal.

He gambled in behind the Latics’ defence after Ryan Bertrand had headed on but despite touching the ball past Al-Habsi , Ramis successfully chased back to clear off the line.

Oscar was introduced just after the hour mark for his Chelsea debut and after replacing the impressive Hazard he came close to opening his account but his low shot across goal drifted inches wide of the post.

Luiz then came close to adding a third for us but his header was claimed by Al-Habsi as we comfortably saw out the final minutes to pick up the 2-0 victory.

After the game Roberto Di Matteo summed up by saying:-

‘I’m very pleased with the performance and result. It’s always tricky, the first game of the season.

‘We played away at Wigan who finished last season on a strong note. Last season we drew here and in the home game had a tough encounter. We were expecting a difficult game and the two early goals really helped us and settled a lot of nerves.’

Next up for the Blues a midweek fixture Wednesday at home to newly promoted Reading.