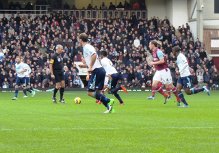 Benitez made two changes from the side that drew with Fulham in midweek, recalling Mata and Gary Cahill with Oscar dropped to the bench.

Benitez would probably have been grateful to get away from the hostile atmosphere he had found himself in at Stamford Bridge but it did not stop Chelsea away support from hailing former manager Roberto Di Matteo in the 16th minute.

We were already ahead thanks to Mata’s 13th minute strike with Fernando Torres playing a decisive role in the opener.

After making a sharp run down the right side of the penalty area, Torres had the vision to cut the ball back for Mata to side foot effortlessly into the far corner from 12 yards.

We remained dominant throughout the half, Eden Hazard fired just over the crossbar, then Mata forced a superb save from West Ham goalkeeper Jussi Jaaskelainen after being set up by Victor Moses.

But the second goal wouldn’t come, and the fragility of a one-goal lead was highlighted just before the break when Kevin Nolan forced a full-stretch save from Petr Cech with a powerful header from seven yards.

Sam Allardyce made a double substitution at half time bringing on Matt Taylor and Diame for James Tomkins and Gary O’Neil.

West Ham played with far more energy after the re-start and in the 63rd minute they found the equaliser.

Matt Jarvis whipped in a cross that hit Gary Cahill’s head and looped high into the air. It became a simple battle between Carlton Cole and Ivanovic and the West Ham striker wanted it more, heading into the bottom corner from five yards.

Chelsea’s response was almost immediate. Jaaskelainen made a double save to deny Hazard and then Torres but was motionless as he watched Mata’s stunning free-kick from 30 yards curl over the wall and rattle against the post.

At the other end, Jarvis raced on to Mark Noble’s pass and forced Cech into a fingertip save before Ashley Cole headed Winston Reid’s header off the line from the resulting corner.

Four minutes from time West Ham got their second as Carlton Cole received a throw-in and teed up Diame, who shot home low and hard past Cech.

There was still time for a third for the Hammers as Ashley Cole conceded possession and Maiga was on hand to finish after Taylor’s initial shot was saved by Cech.

After the match Rafa Benitez said:- ‘It’s not easy, in the first half we could have scored two or three and finished the game,’ he said. ‘It would have been completely different, but we didn’t do it.

‘The only way to turn it around is to keep working hard in training sessions. We have two games every week and it’s not easy. We were a bit better in defence after two clean sheets, and today we conceded three goals but were better in attack. We now have a situation in defence that we need to improve again.

Next up is a return to Champions League with a tie against Nordsjaelland at Stamford Bridge.

The outcome of this and the result from the match between Shakhtar Donesk  and Juventus will determine whether or not we progress to the knockout stages of the competition.