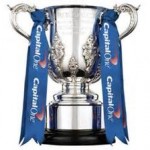 Chelsea were given an away draw against Derby County in the Capital One cup quarter final draw.

After the 2-1 away win in rainy Shrewsbury we now go to the Ipro Stadium looking to book a semi final place.

“Derby County will be our opponents in the Capital One Cup quarter-finals with the game to take place away.

The tie will be on either 16 or 17 December with the exact date and Ticket News to follow.

We beat Steve McClaren’s side at their iPro Stadium in last season’s FA Cup. They are currently top of the Championship table and overcame Carlisle, Charlton, Reading and, on Tuesday night, Fulham 5-2 to reach this stage of the Capital One Cup.

This is the second time Chelsea and Derby have been drawn to play each other in the League Cup. In October 1972 we took on a team managed by Brian Clough in a third-round encounter which ended 0-0 at the Baseball Ground. It was attacks rather than defences on top in the replay when Steve Kember, Peter Osgood and David Webb were on target to give Dave Sexton’s Blues a 3-2 win, John McGovern and Alan Hinton the Derby scorers”