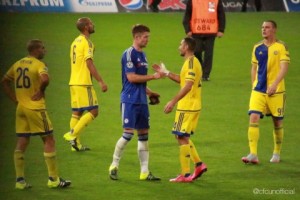 On the back of a well earned win against Norwich in the Premier League, we moved on to our last away trip of our Champions League group games. Sadly, I didn’t travel to Israel, but many of our fans did and by all accounts spent a fabulous few days in glorious sunshine. Not jealous, much!

So the comfort of my sofa at home it was then, and in team news from the Sammy Ofer stadium in Haifa, Begovic was in goal, with Cahill and JT our centre back partnership, flanked by Azpilicueta and Baba Rahman. Ahead of them Fabregas and Matic with Oscar, Hazard and Willian providing the threat up front along with Costa as lone striker. Substitutes were Blackman, Ivanovic, Zouma, Loftus-Cheek, Mikel, Pedro and Remy.

We took a few minutes to settle down, the home team giving us an early scare, but once we’d calmed down and stopped farting about against the group’s weakest team it wasn’t long before we started to put some positive moves together, finally leading to our opening goal after 20 minutes. A corner from Willian with Cahill getting his head to it, the rebounding ball luckily fell to Cahill again and he didn’t miss second time, his boot on the end of his close range shot. And straight to the Chelsea fans in the corner to celebrate.

All very pedestrian though, positive passages of play from both sides being snuffed out in midfield, with the occasional venture into either box. But on the half hour a great chance to double our lead came and went when a perfectly weighted cross into the box from Azpilicueta found Costa attempting the overhead kick only for his shot to go wide. Much better from us now, the Maccabis just looking on as we stroked the ball around.

But with 5 minutes of the half left to play came a series of needless challenges by Chelsea old boy Ben Haim on Costa, the last a lashed out boot to his knee. A straight red card, much to my surprise, it did seem a tad harsh. So, to the boos of the home crowd, Maccabi were down to 10 men, as if their task wasn’t hard enough already, and that’s where the half ended at 0-1.

According to reports Jose and Costa had a right old bust up at half time, but the fiery Spaniard made it out for the second half so all must have been forgiven, with later reports that they had kissed and made up. Bless!

A quiet start to the second half and with Maccabi down to 10 men it should surely be just a matter of time before we start tucking the goals away, but seen it so often when an under strength team galvanises itself to make up the shortfall. And so it transpired as the home team seemed to gain confidence from our lack of penetration into the box, and while there’s only one goal in it anything can happen.

And it nearly did, when just after the hour shots on goal from first Hazard then Azpilicueta were confidentially saved by their young Serbian keeper Rajkovic, Then a quick counter attack saw the dangerous Israeli international Zahavi have his shot athletically saved by the alert Begovic.

Clearly not making inroads Jose eventually made his first substitution, with Pedro replacing Eden Hazard with just over 20 minutes left to play. And a few passes later we were awarded a free kick when Willian was fouled in his favourite free kick launching spot. Meanwhile JT took a tumble under a challenge and had to be replaced by Kurt Zouma, not good to see, and hopefully not too serious.

So, back to the free kick and as the wall were still thinking about it the ball had already hit the back of the net with the keeper rooted to the spot. Superb. How does he do it? I’m glad he does!

And with that the order of things had been restored and within a couple of minutes we had scored a third, a super cross from Baba found Oscar’s head and all he had to do was direct it past the keeper from close range, which he did with ease.

A final change, Willian replaced by Remy, and as we crept towards full time and then stoppages we had time for one more goal, big Kurt Zouma leaping as only he can to get his head on the end of a corner ball that was nodded down past the keeper. Looks as if Kurt was wearing his lucky pants as well, can’t go wrong with that!

So a resounding 4-0 victory in the end, and while we didn’t have it all our own way, especially with the man advantage, we got there in the end. And with Dynamo Kiev beating Porto 2-0, Group G goes down to the wire, with only the Israeli side out of it.

Our final group game takes place on Wednesday 9th December when we face Porto. It should be a top night at the Bridge.