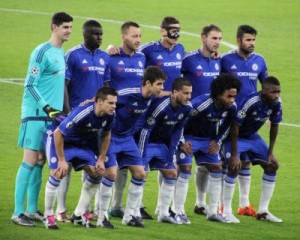 The final group game of our Champions League campaign and to keep things simple we just needed to win the game to top the group, a draw to qualify in second place, and a loss would see us join the Europa League. Love a European night at the Bridge, everything to play for!

In team news, Courtois in goal, and good to see the return of our caption and talisman JT, joined by Kurt Zouma at centre back, with Ivanovic and the rested Azpilicueta out wide. Matic was joined by Ramires in defensive midfield duties, seems Jose finally had the balls to drop Fabregas. Ahead of them Willian, Oscar and Hazard, with Costa up front. On the bench, Begovic, Cahill, Kenedy, Fabregas, Mikel, Pedro and Remy. A positive lineup, come on you Blues!

A competitive start to the game, both sides giving it a good go to try and take the initiative, both needing a result. And with just over 10 minutes played the breakthrough we were hoping for, a good move assisted by a piece good fortune. Moving the ball up the pitch it was Hazard who put Costa through on goal, and as his shot from the edge of the box rebounded off the approaching Casillas, the ball ricocheted goalwards off Marcano and crossed the line before it could be cleared by Maicon. And without goal line technology, it was the extra official behind the goal that gave the decision. Just the start we needed. 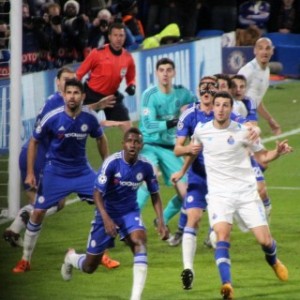 There’s nothing like a goal to get everyone going, players and crowd alike. And Diego Costa was certainly up for it, in his usual confrontational way, at one point going toe to toe with his fellow Spaniard Casillas, as our man appeared to trip the keeper as he picked up the ball. And while Casillas appeared to make the most of it, it was needless from Costa.

And it’s funny how much confidence a goal can give you, as the half progressed we were in the driving seat, and near to the half hour a neat little move found Oscar and Willian on the edge of the box, their one-two leaving Oscar’s shot to go just wide, deflecting off a defender’s backside. Sadly, the resulting corner skimmed over the heads of everyone waiting in front of goal.

I thought Oscar was having a tidy game, getting stuck in where required. And he was certainly taking the piss out of Maxi Pereira. When humiliated by Oscar’s little nutmeg, the Porto man barged him off the ball like a petulant kid. But the succession of a Willian free kick and corner didn’t gain the desired result and a late chance and shot across the face of the goal by Diego Costa more evidence of us being on the front foot. Half time and a satisfactory 1-0 lead.

Start of the second half and both teams set out positively, Porto especially needing to find a goal, and our visitors certainly managed to move the ball quickly up the park, Brahimi looking a bit of a handful. And while we were tending to sit back a bit, inviting the pressure, Porto didn’t really look to have much in the final third. 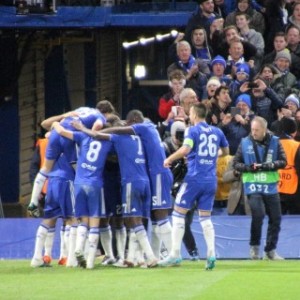 Of course, while Porto needed to find that equaliser, there was always a chance of leaving an exploitable gap, and just a few minutes after the restart, some quick passing found our visitors off guard. A throw in past the half way line found Costa, then Hazard, and finally a delightful ball to Willian streaking goalward unmarked, ready to fire a perfectly executed shot into the near side bottom corner. That’s the way to do it!

With chants of ‘Jose Mourinho’ ringing out, the crowd showed their unswerving support of our manager, we continued to play with the confidence that a two goal lead against a team needing to score at least two goals brings. And while Porto continued to play a slick passing game, there seemed no sense of urgency on their part. But we allowed them to do that, safe in the knowledge that we could pick up any loose ball on the break.

And one of the best breakaway chances came with 20 minutes to play when Costa streaking goalwards from a beautiful ball from Hazard, was shoulder barged by Danilo on the edge of the box, but adjudged to be a 50/50 challenge by the ref, both players trying to take charge of the situation.

While our attacking players were really working the spaces well, Costa and Hazard with some great chances, our defensive line were holding firm, JT and Zouma putting in challenges where they mattered and Courtois making sure. 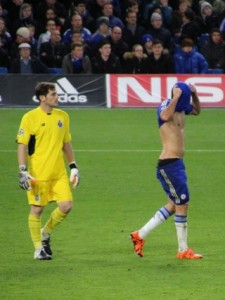 With 10 minutes left to play came our first substitution, Pedro on for the industrious Oscar, perhaps needing to find some boots with longer studs, having slipped on the turf a few times. And a few minutes later Diego Costa was replaced by the steadiness of Mikel. And while we were standing up for the Special One, Jose was preparing our final substitution in the final minute, Remy on for the improving Hazard.

And with a final flourish from both sides in stoppage time, a wayward shot on goal by Remy, and a curling shot by Brahimi at the other end, the final whistle blew, and with it our qualification into the last 16 as Group G winners.

A very satisfactory all round team performance, one much more reminiscent of last season. Let’s hope for a decent tie next Monday morning, when we could be drawn against anyone from, Gent, Benfica, PSV Eindhoven, Juventus, Roma, or Paris St Germain.