They call it the Magic of the Cup and certainly the 3rd round of the FA Cup is a football institution, neutrals and romantics wishing and hoping that the lower league teams knock out the big boys. So all eyes on Stamford Bridge as we faced League 1 opposition Scunthorpe United, and with constant reminders of our last season’s 4th round exit to Bradford, all but Chelsea fans seemed to have their fingers crossed for another cup upset.

Good to see a strong starting lineup, only Courtois and JT dropped to the bench from the regular picks, with Hazard still injured. Begovic in goal, with Ivanovic, Zouma, Cahill and this week’s masked man Azpilicueta across the back. With Fabregas and Ramires were Willian, Oscar and Pedro, with Costa the lone striker. Also on the bench Rahman, Mikel, Kenedy, Loftus-Cheek and Traore.

A quiet first few minutes of the game, both on and off the pitch, but with many of the Stamford Bridge regulars missing, it was nice to see plenty of younger fans get the chance to watch the Blues in action. No doubt many will return as they get older and hopefully create a bit more noise.

Not much action on the pitch to speak of, pretty evenly contested, with our boys happy to push the ball around patiently waiting for a positive opening, perhaps concerned that a lower league opposition might be content to kick lumps out of them if they got too close. With 10 minutes played we were awarded a free kick slap bang in Willian territory, and while that came to nothing, the resulting passage of play found the ball with Ivanovic out on the right and a delicate long pass into the box finding the feet of the advancing Costa, who held off his marker and diverted the ball into the back of the net. Perhaps a suggestion of an own goal, but we’ll skip over that! 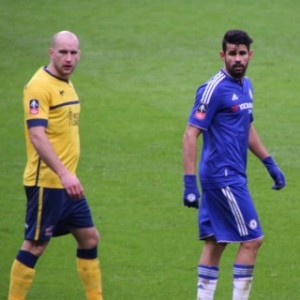 But that goal seemed to give us some impetus and a few minutes later Fabregas was given space to have a long range shot, only the keeper’s fingertips preventing the goal. And with that excitement the fleeting return of the Fabregas is Magic song, after quite a lengthy absence. Much better from Chelsea, Pedro and Oscar having a go, and our visitors having to resort to parking the proverbial bus at times.

Half hour in and it was all Chelsea, our superior quality clearly evident and we really should have been two or three goals up by now, and any half chances Scunthorpe did create were easily snuffed out. But in the dying minutes of the half Scunthorpe were getting more of the ball, with a number of corners conceded and big Kurt Zouma called on to demonstrate his signature last ditch slide tackling. HT 1-0 and Scunthorpe must have been encouraged by the score line if not their performance. As they say, all to play for!

Second half and we were delighted to see the introduction of Ruben Loftus-Cheek, on for Oscar. But once we’d settled in the momentum shifted in favour of the Lincolnshire lads, clearly sensing that with just one goal in it anything could happen. And it very nearly did when Van Veen went down in the box as he felt Ramires breathing down his neck and the slightest of touches as their ankles clipped. No penalty according to the ref, but we’ve all seen them given. 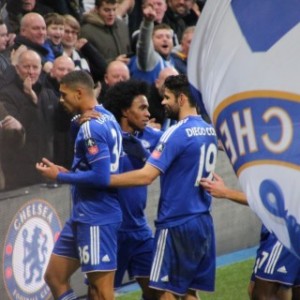 And as Scunthorpe picked up the pace, their fans woke up as well. We almost forgot they were there! And let’s face it, they had a bit more to sing about second half as their boys resorted to the rough-em-up small team tactics, but trying to rile Diego Costa is probably not the best option. It all got a bit fraught for a few minutes with the thug Dawson seemingly at the centre of most of it.

But just as Scunthorpe must have been enjoying their resurgence, up popped Loftus-Cheek to double our lead and put paid to their ideas of an upset. Great movement down the left, with Willian finding Azpilicueta who cut the ball back into the penalty area and with Costa dragging the defender away leaving RLC with a pretty straight forward but well taken ball guided into the bottom corner. Cue joyous celebrations with the Matthew Harding crowd and so good to see our brightest young prospect getting his moment in the limelight.

With 20 minutes left to play it was probably game over and with it Scunthorpe’s and the country’s hopes of another FA Cup banana skin for us. Our second substitution saw Pedro replaced by Kenedy.

And in the comedy moment of the game a Scunthorpe free kick on the edge of the box was slammed straight into the side netting to the mistaken celebrations by the away fans, despite being located just behind that goal. Clearly wishful thinking got the better of them, bless those cheeky northerners! But fair play to Scunthorpe, they didn’t give up, and continued to fight for the ball for the remainder of the game.

With 5 minutes to go the hobbling Costa was replaced by Traore. And in a late flurry Scunthorpe fought hard to retain possession in front of our goal, with the ball eventually finding Clarke unmarked on the edge of the box, and who let the ball fly at goal, only for Begovic to stop the shot with the help of the woodwork.

But for all Scunthorpe’s endeavours we looked comfortable with our two goal lead even though we could have made more of our chances in the first half, we did just enough and no more. Good team effort though, RLC clearly the star but I thought Fabregas had a good game, some silky skills and quality ball from him. It was just a shame we didn’t use the opportunity to take the game by the scruff of the neck, play for a resounding victory to galvanise our boys, especially on the back of last weekend’s top performance away at Palace.

So, to the final whistle and we earned our place in the 4th round, let’s hope a decent Cup run brings confidence back to the team.