Following a string of games unbeaten, there was expectation on the team to use our next two games at home to give us some corner-turning performances and collect some much needed points along the way. In the first of those games we played host to the Baggies of West Brom. Thankfully the team turned up because their fans certainly didn’t, the away end half empty.

Our team lineup saw Courtois in goal with the favoured back four of Ivanovic, Zouma, Terry and Azpilicueta. With Fabregas and Mikel were Willian, Oscar, Pedro and Costa up top. On the bench were Begovic, Cahill, Ramires, Matic, Loftus-Cheek, Kenedy and Remy.

It didn’t take long before our first shot on goal from Costa, the ball neatly threaded through the West Brom defence, shrugging off their defenders with ease. But despite showing some early intent it was a pretty even first few minutes of the game, the play going from end to end, both teams content to pop the ball around the park.

But while neither team were taking the game by the scruff of the neck the crowd seemed restless, a lot of muttering around the stands. But on 20 minutes we finally had something to make a noise about. A great team move started by Fabregas, who looked up and found his usual target Costa, and with some neat interplay down the right involving Willian and Ivanovic, Costa collected the ball on the edge of the 6 yard box and diverted it across the face of the goal for the approaching Azpilicueta to turn into the back of the net. A well worked goal, great team play.

While not convincing we looked in control of the game despite our visitors having their fair share of the ball. But in a breakaway move came the first sign of West Brom’s cynical tactics, while Olsson had prevented Costa from starting his run, the snidey Yacob had prevented Willian from advancing with the ball. Two men down but just one yellow card from the referee Anthony Taylor.

The game continued in its scrappy fashion, but despite the lack of quality we were competing for the ball, and when it did go back young Kurt Zouma was there to spring high into the air and nod the ball back into the mix. And while our patient build up play didn’t quite reap its rewards it was good to see the positivity, the fans urging our boys on. 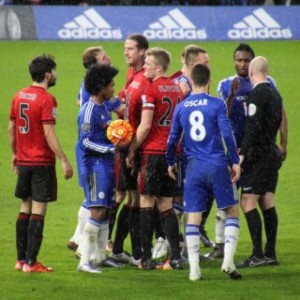 But just when we thought things were going well Pedro found himself dispossessed in midfield, a quick pass to Gardner and the ball was in the back of the net from distance, while our defence just looked on, Courtois not quite able to get across to the low ball. At least it got the sprinkling of travelling supporters going, rattling around as they were in the corner of the Shed, treating us to their one song repertoire; apparently we are Going Down with the Villa! How sweet 🙂

As if Yacob wasn’t in enough trouble he should have been sent off within 5 minutes of the goal, Oscar collecting the ball from Fabregas and as he turned towards goal the snivelling one pulled our man back. But the pesky snide got away with it!

With a minimum of 3 minutes stoppage time, it was disappointing that the ref decided to blow his whistle as we were on a promising break, much to the consternation of the fiery Costa, but the 3 minutes were up. Just. If you don’t include the faffing about over their free kick immediately prior to the whistle. Despite that, an enjoyable half of football, a tad feisty, which ended 1-1.

Second half and great to see the young Brazilian Kenedy on to replace Pedro, sadly not having the best of games first half.

The first chance of the half fell to West Brom, a throw in eventually finding McClean whose header in front of goal was comfortably dealt with by the diving Courtois. All quite sedentary compared to the first half, the unambitious Baggies content to slow the game down at every opportunity, and whinge to the ref for every innocuous misdemeanour.

Meanwhile Kenedy was looking useful on the ball, tearing down the left after Costa had fought for possession. But as Willian and Costa were running with him towards goal, the smarmy faced Yacob cynically prevented Costa from running into the box. But with Yacob still on a yellow card, the ref once again bottled it and just gave the free kick, admission in itself that a foul had been committed. What does this guy actually have to do to get his marching orders? Thankfully, for him at least, his boss had the sense to replace him, to resounding boos from the appreciative home crowd. Sadly the resulting Willian free kick came to nothing as the ball sailed over the wall and the cross bar.

But we battled on despite the spoiling tactics and we eventually started to find space to have a run at goal, using the pace of Kenedy as a catalyst. Still, at any opportunity they killed the game with their time wasting tactics, culminating in a bizarre incident when fat bar steward Myhill refused to take the free kick while Dawson re-learned how to tie his boot laces. Incredible, a yellow card for Myhill, and rightly so.

But it didn’t stop there, the ref then deciding to book both Courtois and the volatile McClean for going toe to toe following the Irishman’s kicking away of the ball. Somewhere amongst all this madness there was a game of football trying to break out!

Finally the breakthrough came, a super ball from Fabregas to Willian on the edge of the box, and with Kenedy streaking down the middle towards the goal, it was Willian’s near post cross that had the youngster and the defender sliding in, with the West Brom man McAuley getting the last touch and Myhill floored. With 15 minutes left, it was all feeling good for the 3 points as we looked to kill the game off.

Within a few minutes Matic was brought on for Fabregas, designed to shore things up and retain the lead and while that was the case we fought hard on the pitch, Kenedy seeing a long range shot go just wide of the post.

But that cunning plan backfired when with just 5 minutes left to play the ball rebounded back to McClean just outside the box, which he duly struck into the bottom corner of the goal, Courtois unable to do anything about it. But nice to see fat boy Myhill celebrating with the Matthew Harding (cough!), and the West Brom choir boys once again reminding us of our impending relegation with their Brummie cousins!

While the more generous of us might argue that West Brom worked hard for their point, I was disappointed that we let them come back at us, sitting far too deep, and when 5 minutes stoppage time was announced our heads went down and we weren’t able to compete, the quality and desire had just disappeared along with the two points dropped.

So it finished 2-2, very frustrating, and typical of our season. Undefeated yes, but the win was in our grasp. And yes, the referee had a shocker, but we should be good enough, big enough and clinical enough without undue influence of the ref’s poor officiating.

But in the cold light of day there were positives in there somewhere; Kenedy looked lively and hungry when he came on, and it goes without saying that Willian was his usual influential self. I also thought Fabregas had another good game; he was the instigator of many of our attacks, looking up and finding a player on the move, usually Costa who, despite his wanting to offer everyone out, looked like he wanted to be involved with the game as well.

I don’t think we are going down with the Villa, but come on Chelsea, let’s fight for all 3 points next time! KTBFFH

Vote Now For Your Players Of The Season