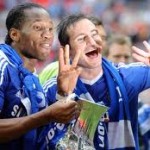 “The draw for the third round of the FA Cup took place this evening, with the Blues handed a home tie against lower-league opposition.

We will play either Peterborough United or Notts County at Stamford Bridge with a place in the fourth round at stake.

The two teams drew 2-2 yesterday and the replay will take place next week.

The Blues will be chasing an eighth triumph in the competition. We lifted the trophy most recently in 2012 when Liverpool were beaten 2-1 at Wembley thanks to goals from Ramires and Didier Drogba.

Ties will be played between 6 – 9 January”