Christmas came early for 10 lucky Chelsea supporters who attended ‘Chelsea Foundation’ Community Day at Cobham on Tuesday 6th December to watch the first team train under Antonio Conte and afterwards for a meet and greet, autograph and photo shoot with the players.

They were nominated via the Chelsea Supporters Group for having gone that extra mile in charity work, fundraising or needing to have an extra treat for personal circumstances.

They had an amazing time and we would like to thank everyone involved at Chelsea Football Club for setting up such a fantastic opportunity for those who were lucky enough to attend.

Graeme and Gill :- “It was brilliant watching the first team being coached by Antonio. He is just as passionate in training as he is on the touchline. Meeting him and the players was really special and a day we will never forget. 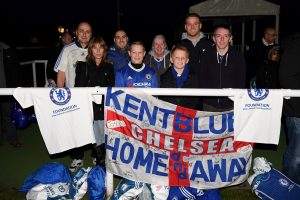 The feedback from all that attended was very positive, perhaps we can make this an annual event, more supporters should have the opportunity to visit these great facilities.