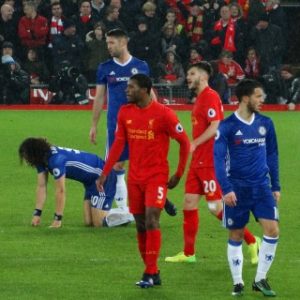 It was a wet night in Liverpool and there was palpable excitement and expectation about the prospect of extending our lead at the top of the Premier League, the first of two possible league defining fixtures within a week.

A tried and trusted lineup saw Courtois in goal with Azpilicueta, Luiz and captain Cahill in the familiar back three, supported by Moses and Alonso on the flanks. With Kante and Matic in the middle of our pitch were Willian and Hazard up front with big Diego leading the line. On bench warming duties were Begovic, his transfer possibilities now over until the summer, Zouma, JT, Fabregas, Chalobah, Pedro and Batshuayi. No longer will we see Branislav Ivanovic who, as expected, transferred to Zenit St Petersburg. Good luck Brana!

They were slippy conditions as we kicked off, the rain hammering down and making for a frantic start, a start where the home side seemed keen to make an immediate impact. They may have had plenty of possession but they weren’t doing much with it – their plan to turn the teams around at kick off to allow the Kop to suck the ball into the goal not quite working out for them.

rpool couldn’t take advantage of our shaky start we gradually came back into the game as we seemed to be lulling them into a false sense of security, soaking up the pressure at the back while poised ready for the possibility of that killer counter attack.

It was a quick attacking move that led to a foul on Hazard a good distance outside the box and from where the free kick was given. And while we were in hand-rubbing expectation of a sublime Willian curler, instead Luiz took matters into his own hands and with a no nonsense run up at the ball he just blasted it into the back of the net while Mignolet was still trying to line up his wall. It was genius, and just as my away end neighbour had predicted it, as he declared “Luiz is having that!” There were scenes in the away end as we celebrated and just laughed at the sheer cheek of it, while our boys sprinted off in the direction of Conte and the bench in delirious jubilation. Oh David Luiz…..

We were all buoyed by that wonder goal; and our wet look curly haired one was inches away from doubling our lead before heading up the other end and ending in a heap on the pitch having treatment. Luiz was certainly in the thick of things.

The rest of the half eventually settled into a pretty even game, and when Liverpool did have possession they just couldn’t get through our solid defence. HT 0-1

The team in red clearly had the bit between their teeth at the start of the second half as they had no option but to push on for the equaliser before we had a chance to run away with the game. There were early chances by Firmino and Lovren at one end while we were testing the resolve of Mignolet at the other end, decent opportunities by Moses going begging.

But the game for the most part remained a scrappy affair in the middle of the park, misplaced passing and dogged fighting for possession – it was a case of who would emerge from the midfield mire first and work that ball into the back of the opposition’s net.

Alas, as we approached the hour Liverpool had worked their way through and equalised, Henderson with a ball over the top of the back line that was nodded into the 6 yard box by Milner and for the approaching Wijnaldum to head past Courtois at close range. David Luiz was livid, his hard work undone in a stroke. But worse, it woke up the sleepy Scousers who suddenly remembered they had a team on the pitch that needed all the help they could get. But Liverpool could make nothing of their so-called12th man, so they soon went back to sleep again.

With 20 minutes left to play Pedro was brought on in place of Hazard, who appeared to me to go straight down the tunnel. Nipping to the loo? Carrying a knock? It might explain his decline in explosive form of late. But no sooner had Liverpool made a substitution of their own by bringing on Sadio the Saviour, Costa was upended in the box and was awarded a penalty. Up stepped Costa, our usual spot kick taker Hazard having been replaced, to fire us into the lead, but instead Mignolet dived the right way to deny us a certain winner. Shame. 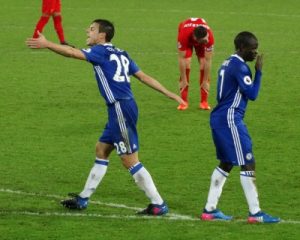 Evenly poised as we entered the final few minutes of the game, the result would be significant for both sides; for us a chance to extend our lead at the top of the league and for Liverpool a must win game to keep their slim title hopes alive – it was all they had left to play for having been dumped out of both domestic cup competitions within the last few days.

With Fabregas now on the pitch in place of Willian it would be interesting to see how he would link up with Pedro and especially Costa, with the vision he has for spotting that well timed forward run. We were pushing all the way and we looked the more likely to score, taking our time to get ourselves into promising positions, everyone working hard to try and make it happen, the Chelsea away support trying to do our bit as well.

With Costa replaced by Batshuayi at the death of the game, we could console ourselves that one point gained for us at the top of the league was in great contrast to the 2 points dropped by Liverpool, as well as all the points dropped by the chasing pack. The Blues go marching on.

“Meeting A Legend” (posted by Herzl)