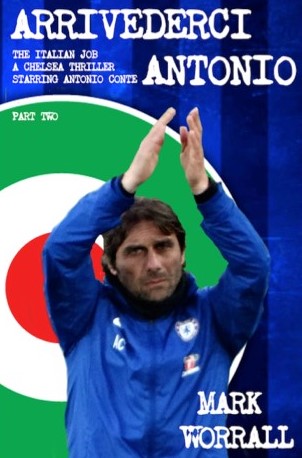 “Arrivederci Antonio is the second and final instalment of 2017s best-seller The Italian Job – A Chelsea thriller starring Antonio Conte (part one). During the process of guiding the Blues to the Premier League title in his first season as manager at Stamford Bridge, Conte had become a true man of the people revered by supporters who appreciated his tactical nous and applauded his passion for the game of football and determination to win. Basking in the glow of that title triumph, expectations among the fans were running high in the summer months. Champions League football was back on the agenda and a raft of major signings were being rumoured… star players who would enable Conte to take Chelsea to the next level. Something wasn’t quite right though. The Italian was unhappy and he predicted that 2017/2018 would be the most difficult season of his career… he wasn’t wrong!

Arrivederci Antonio chronicles Conte’s gut-wrenching and drawn out demise at the Bridge from a supporter’s perspective. Alleged boardroom wrangling’s, missed transfer targets, fall outs with the boys from Brazil, fall outs with Jose Mourinho, false 9 experiments, suffering without the ball, suffering with the ball, the search for the ‘perfect game’, embarrassing defeats… and one final two-fingers-up-at-the-world-style grandstand victory at Wembley make for the type of gloriously unpredictable rollercoaster ride that only Chelsea ever embark on.

Set against a backdrop of spectacular #ConteIn #ConteOut #ConteIn #ConteOut supporter spats on social media, Arrivederci Antonio is a unique and entertaining insight into the triumphs, disasters and conclusion of Antonio Conte’s mind-bending reign as Chelsea manager” 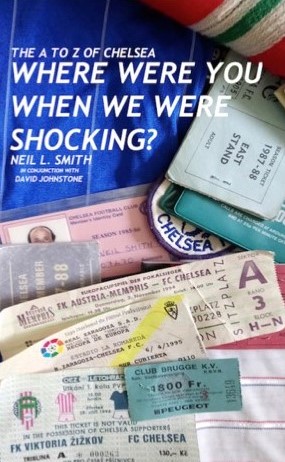 “The A to Z of Chelsea “Where Were You When We Were Shocking?’ is a selection of Neil Smith’s memories from just a few of the now (July 2018) in excess of 2000 Chelsea matches he has attended. It is also a look back at some of the occurrences he witnessed that in some way shaped his life.
Neil’s first game was at Stamford Bridge in 1966 when Chelsea beat West Ham 6-2 on April 9th when he attended with his older brother Martin. When he got home after that game, he wrote some words about the day and it was the start of a habit that, as he got older, became a diary.

The title of Neil’s book is in no way a ‘slight’ on the glorious Chelsea Football Club. Indeed, like many others of his ilk, Chelsea have always been the best football club in the world with the book’s name simply reflecting the fact that they weren’t as successful back then as they have been since around 1997.

While there are plenty of books about matches played, individual players and managers and of course the historical aspect of Chelsea FC, ‘Where Were You When We Were Shocking?’ gives a unique perspective of following the side from one of the club’s most loyal supporters.

‘Thoughtful, funny, away-day reminiscences on days spent supporting the Blues, and how the less important things in life very nearly get in the way.’ Rick Glanvill Official historian Chelsea FC”

In The Clear Light Of Day ……